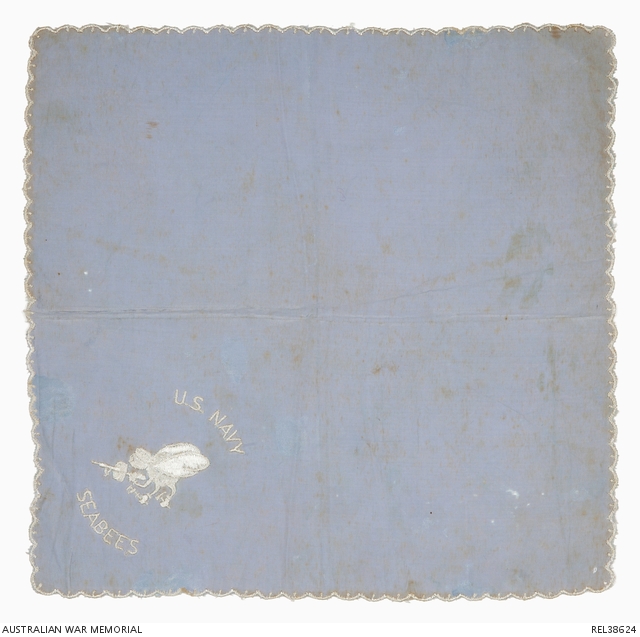 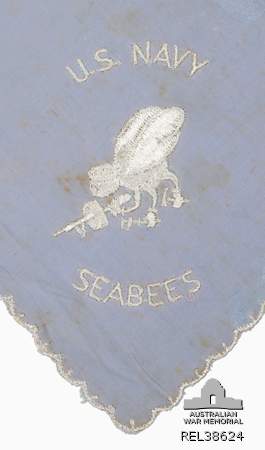 Souvenir Seabees handkerchief given to Miss Betty Dean. Betty recalls that when she was 9 or 10 years old, 'mother [Mrs Phyllis Madge Dean] and I were living in a guest house in Arden Street, Coogee, NSW. Miss Chave was the owner and a long standing friend of my mother's. Some [American Seabees] either come down to dinner there or were billeted there. One of them gave me this memento which I have kept for almost 60 odd years. As a child this was very exciting having all these servicement to visit - they were very polite and interested in our country.' Mrs Dean and her daughter had been staying at this guest house in mid 1942 'when the Japanese subs came into Sydney Harbour. We used to keep a suitcase packed in case of a hasty retreat to an air raid shelter. Mother also was an Air Raid Warden.'

Arden Street in Coogee sits one block back from Coogee Beach, which was wired against the possibility of invasion at the time; the Coogee tram also ran along Arden Street. The practice of billeting American servicemen in private accomodation across Sydney was widespread and certainly aided in encouraging cordial relations between the locals and the Americans. 'Seabees' was a contraction of the term 'Construction Battalion' which were organised under the aegis of the US Navy's Civil Engineer Corps and were renowned for landing immediately behind the Marines in the Pacific campaigns where their responsibility was to build infrastructure such as airstrips, bridges and roads, as well as storage and housing facilities, often under fire. Over 375,000 men served in the Seabees. Because of the skills required, their average age was 37.

Only one group of men, a detachment from 84 Battalion Seabees, were stationed in Sydney as far as can be ascertained - they were sent to Sydney on 22 April 1944. It is likely the handkerchief dates from this latter period of the war.

The 'Fighting Bee' insignia was created in late 1942 by Frank Iafrate, a civilian file clerk of Rhode Island with a talent for cariacature when working at the Naval Air Base at Quonset Point. Iafrate enlised in the US Navy later in 1942. During the war he served as a Chief Carpenter's mate in a Seabee Construction Battalion Maintenance Unit. He worked as a commercial and graphic artist after the war. The Fighting Bee remains the official insignia of the Seabees to this day.