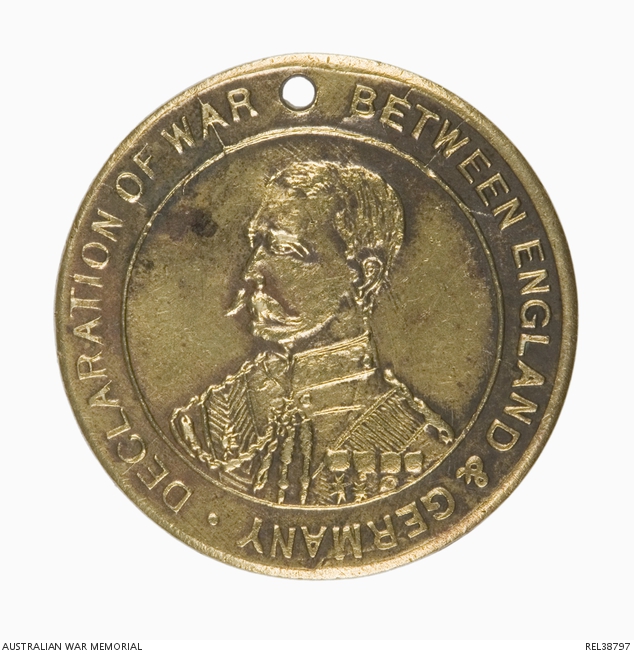 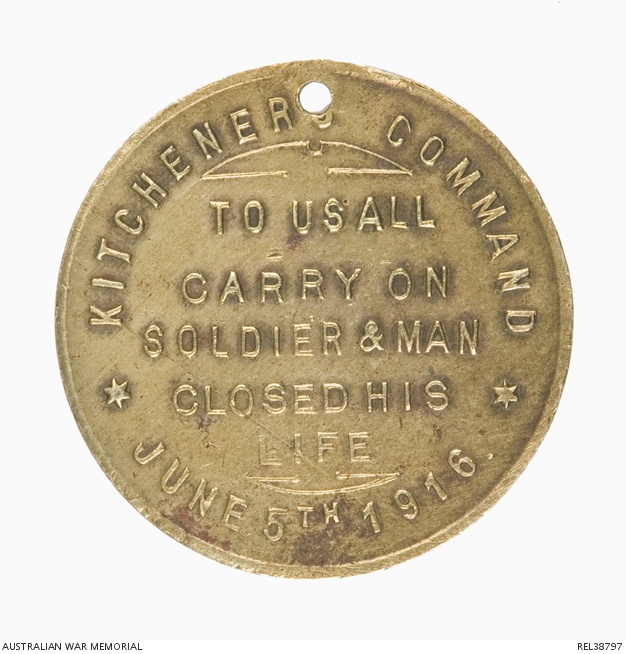 Circular brass medalet with a suspension hole at the top. Obverse features a portrait of Lord Kitchener facing left within a circular frame enclosing the words 'DECLARATION OF WAR BETWEEN ENGLAND & GERMANY'. The reverse features the words 'KITCHENER'S COMMAND / JUNE 5TH 1916' around the rim and the words 'TO US ALL / CARRY ON / SOLDIER & MAN / * CLOSED HIS LIFE *' central.

Unknown. An unusual variation of this medalet.The obverse appears to commemorate the declaration of war while the reverse commemorates Lord Kitchener's death in June 1916. A similar Australian medalet was produced, but the words 'Honour the Brave/In our Memory He Lives' replaced 'Declaration of war between England & Germany'. The remaining wording is the same. The only other obvious difference is Kitchener's portrait which is reversed but in all other aspects is identical.
Kitchener initially rose to prominence upon becoming Commander-in-Chief of the Egyptian army, then under British control, and taking the city of Khartoum in 1898 after a two year battle which earned him the nickname of 'Kitchener of Khartoum'. He cemented his reputation towards the end of the Boer War, during which time Australian troops came into contact with him. From 1902 -1909, Field Marshall Viscount Kitchener commanded Britain's Indian forces. In 1909/10 he visited Australia at the invitation of Prime Minister Alfred Deakin to inspect and advise on the country's defence preparedness. Kitchener's report, submitted in February 1910, recommended the introduction of compulsory military training which was immediately adopted, as was the establishment of the Military College, Duntroon. His visit was accompanied by popular outpourings of sentiment and the production of countless souvenirs. The British government had no hesitation in appointing Kitchener the Secretary of State for War in 1914, employing his face on the now famous 'I Want You' recruiting posters and handing him the administration of all British Forces. Against his better judgement, and under considerable pressure from Winston Churchill, Kitchener agreed to support the Gallipoli campaign in February 1915, but its disastrous outcome damaged his military reputation. His tour of Gallipoli on 13 November 1915 included meeting Australian troops and their commanders. Kitchener died on 5 June 1916, when the cruiser he was sailing on was sunk by a German mine off Scapa Flow. This medalet is one of scores of objects produced in a variety of media to commemorate his untimely death.