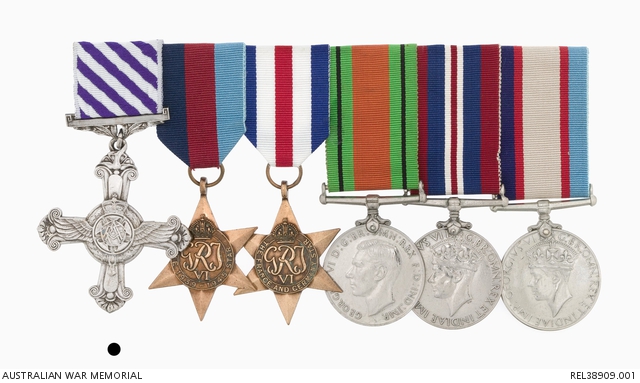 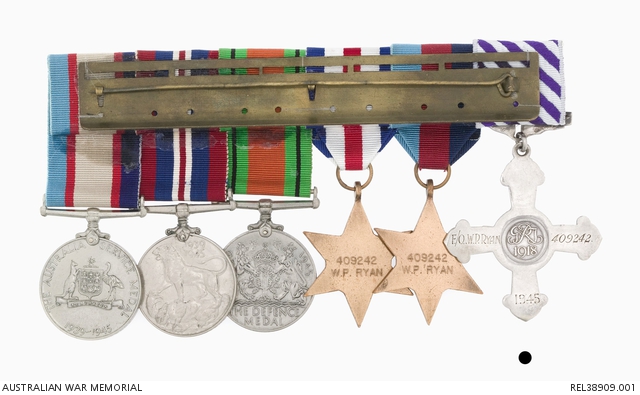 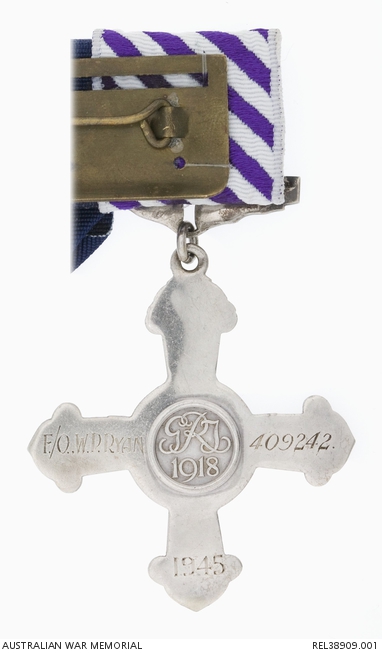 Distinguished Flying Cross (DFC) awarded to Flying Officer W P Ryan, for gallantry while serving with 97 Squadron RAF during the Second World War. William Patrick Ryan was born in March 1919 at Monee Ponds, Victoria. Prior to his enlistment with the RAAF, Ryan was employed with the Department of Customs based in Canberra, ACT. He enlisted for military service in July 1941 and undertook initial training in Australia at various locations in Victoria, Tasmania, and South Australia, before qualifying as a pilot in April 1942. Ryan embarked for the United Kingdom in August 1942 and trained at No 5 Lancaster Finishing School. He was promoted to flight sergeant on 15 December 1942, warrant officer on 25 December 1943 and pilot officer on 18 February 1944. He flew numerous bombing missions over Germany throughout 1944 and 1945. Ryan's DFC was gazetted on September 1945. The citation reads: 'Flying Officer Ryan has always shown the greatest enthusiasm for operations. He has pressed home each of his attacks with the utmost determination, often in the face of severe opposition. In addition to taking a leading part in the recent offensive against German oil targets, this officer has attacked Kiel, Stuttgart, Munich, Gdynia and Dresden. During a daylight attack on Cassan in August, 1944, Flying Officer Ryan's aircraft was badly damaged while in the target area. It became very difficult to control but, by outstanding airmanship he succeeded in flying it safely to base. He has proved himself to be a fine pilot and captain of aircraft.' The damage to Ryan's aircraft, referred to in the citation, was caused by two bombs falling through the left wing. Despite this, he was able to ensure the safety of himself and his crew. Flying Officer Ryan was repatriated to Australia in October 1945, after having accumulated 1246 flying hours including 1 1/2 tours as Pathfinder.