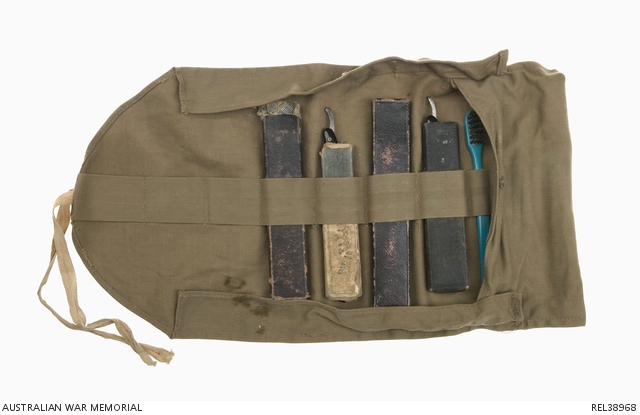 Second World War Australian Army issue olive green holdall containing four razors and a toothbrush. When unrolled it has a has a folded cotton tape strip along the length of the holdall. Dividing lines have been sewn to secure the tape to the holdall and to allow items to be stored. The end of the holdall has been folded back on itself and stitched on the sides creating a pocket for storage. On top of the pocket has been stamped the broad arrow and below that, the number '287'. At the tip of the holdall has been sewn a pair of white cotton tapes that secure the holdall when it is rolled up. The first razor is in it's original cardboard case which has no identifying markings. The blade, which folds into it's black bakelite handle is stamped with the maker's name 'BENGALL' near the handle. The second razor is in a cardboard case which is missing it's top. On the outside of the case is the text 'BIRKO' next to a crown, followed by the word 'BEST'. The razor has a black bakelite handle. The blade is in good condition and has the maker's details 'W' over a crown stamped into metal near the handle and 'WILKINSON / RAZOR' stamped next to the other mark. The remaining two razors are similar to the first. Both are in their original cardboard cases, the last one is missing it's top. The fourth razor's bakelite handle has broken near where the blade's tip is housed. Both razors are stamped 'BENGALL' on the metal near the handle. The toothbrush has a blue plastic handle. The head of the brush has black and white bristles set into it. Down the handle are impressed the maker's details, and origins. 'MADE IN AUSTRALIA' is followed by 'ANTI-D-K' which has been painted gold, with 'NATIONAL BRUSH CO. / WARRANTED PURE BRISTLE'. At the end of the brush's handle a hole has been molded. Next to the hole is impressed 'D [BROAD ARROW] D' which shows it has been issued by the Department of Defence.

Associated with the Service of N229735 Sapper Raymond Leslie Ferguson who was born on 1 April 1924 in Sydney, NSW. Ferguson was a qualified electrical fitter when he enlisted in the Citizen Military Forces on 7 April 1942, just days after his 18th Birthday. He commenced duty on 27 April and was posted to 2 Military District Engineer Training Depot. After completing his training, Ferguson was posted to 59 Australian Field Park Company in Queensland, arriving for duty on 5 September. On 17 October, Ferguson embarked with his unit from Brisbane for duty in New Guinea. He disembarked in Port Moresby on 29 October. On 27 January 1943, Ferguson marched out to Headquarters, New Guinea Force for return to Australia. At 18, he was found to be underage for service in a war zone. On 17 March, he returned to Australia, arriving in Townsville on 22 March. From Townsville, Ferguson was posted to South Heads in Sydney for artillery training, arriving on 4 June. After several months training and a period of leave, he was posted back to Townsville on 12 December. He was posted to 'H' Heavy Battery on 3 March 1944 and embarked with his unit from Townsville for further service in New Guinea on 14 March. He disembarked at Milne Bay on 16 March where his unit was employed in a costal defence role. After four months at Milne Bay, Ferguson returned to Australia on 27 July, arriving in Townsville two days later. On 16 October, Ferguson, who had been Absent Without Leave for two days, was brought before his commanding officer and charged. He was fined 3 pounds and lost a further two days pay. Ferguson transferred to 3 Australian Trade Training Depot on 16 February 1945 to undergo training as a refrigerator mechanic. He was evacuated to 115 Australian General Hospital where he underwent a surgical procedure. Ferguson rejoined the training depot on 28 March. He passed his trade qualification on 28 September and was posted to 2 Australian Stores Base Depot the following day. He remained with this unit until his discharge on 18 July 1946.