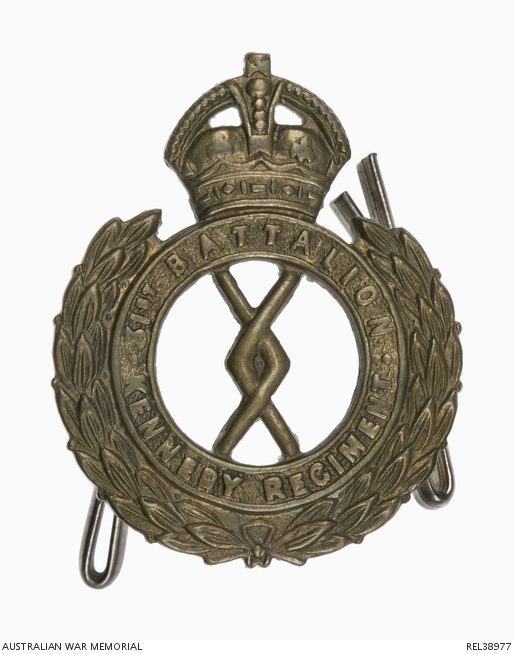 The badge is circular, surmounted by the King George V crown. The outer circle is surrounded by a wreath. The words '31ST BATTALION / KENNEDY REGIMENT' are written in raised lettering inside the circle. The voided inner ring has a pair of crossed boomerangs running vertically through the middle. On the reverse of the badge two brass lugs have been soldered for attachment to a uniform. Each lug has a split pin attached.

At the conclusion of the First World War, the defence of Australia was passed onto the Citizens' Military Force (CMF). The CMF was known as the militia and was organised along the lines of the First AIF. The militia units were also allocated to the same areas in which they had been raised for the AIF. These units also took on the name of their local shire. The 31st Battalion, based in Townsville was known as the Kennedy Regiment as Townsville is within the Kennedy Lands District. The 31st Battalion was raised in 1921 and over the next 18 years maintained its battalion status, even though other battalions were merged due to lack of numbers and funding. In 1940, 11 Brigade, containing the 26th, 31st and 51st Battalions mobilised and were based at Miowerea near Bowen on the north coast of Queensland. In 1943, men who were deemed to be needed in essential industries were discharged from their militia service. The sudden loss of personnel from the battalions forced the 31st and 51st Battalions to be linked, forming the 31st/ 51st Battalion. This unit saw service in Dutch New Guinea as well as on Bougainville. Following the war the 31st/ 51st Battalion was sent to Nauru and Ocean Island to oversee the transport of Japanese prisoners. The unit returned to Australia in May 1946 and was disbanded in early July 1946.