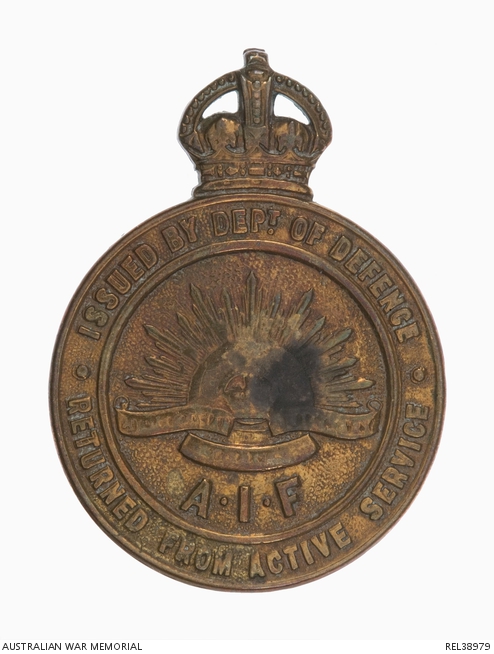 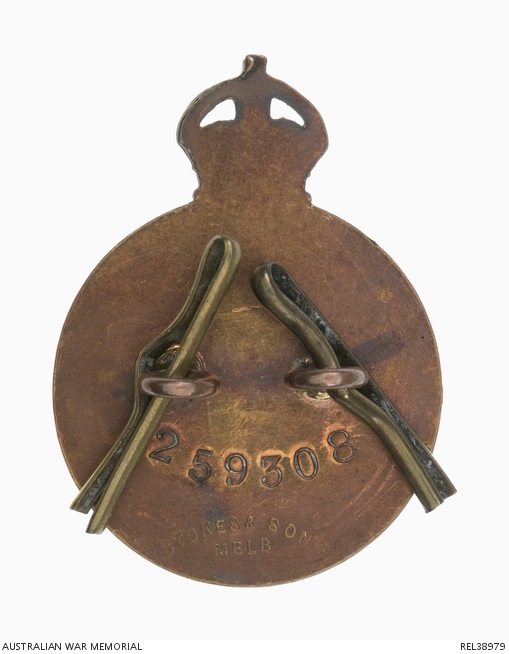 The Discharged Returned Soldier Badge is circular, surmounted by the King George V crown. Around the outside of the badge in raised writing is 'ISSUED BY DEPT. OF DEFENCE / RETURNED FROM ACTIVE SERVICE'. In the center of the badge is the rising sun under which is 'A.I.F.' in raised letters. On the reverse of the badge has been soldered two brass lugs, each with a split pin attached so the badge can be secured to a suit or other clothing. Beneath the lugs is stamped the badge number '259308'. Written under the badge number in raised lettering are the maker's details 'STOKES & SONS / MELB'.

Associated with the service of 6070 Private Archibald Leslie Ferguson, who was born in Goulburn, NSW on 2 June 1888. Ferguson enlisted in the town of Wingello, NSW on 14 August 1916 . He initially joined 2 Battalion but transferred to 18 Battalion on 12 September 1916. He embarked from Sydney with 17 reinforcements of 18 Battalion on 25 October in HMAT Ascanius and arrived in Devonport, England on 28 December. Ferguson was admitted to hospital on 4 January 1917 with a broken leg. He spent several months recovering before being moved to 5 Training Battalion on 20 April. On 9 July, he proceeded overseas to France where he was taken on strength of 18 Battalion who were in camp at Bapaume. In Early September, the battalion moved to Belgium to prepare for their role in the fighting around Menin Road. On 20 September, the battalion moved off from Bellewaarde Ridge to their attack positions on Westhoek ridge. The battalion attacked at 5:40 am and were caught in a heavy German barrage causing many casualties. Ferguson received a shrapnel wound to his left hip and over the next two weeks was moved to England to recover. He returned to France and rejoined his battalion who were now in rest positions near Lumbres in France on 13 February 1918. Ferguson next saw action when the German Army launched its spring offensive on the Western Front. The battalion went into action near Villers Brettoneux in early April and moved to positions in Hangard Wood on 13 April. Ferguson was wounded for the second time on 15 April when he received gunshot wounds to his head and back. After hospitalisation and recovery in Rouen, he returned to duty on 6 May. Early on the morning of 29 May, the battalion was in the lines near Ville Sur Ancre and came under a sustained bombardment. The Germans fired mustard gas and high explosive shells into the line causing several casualties. Ferguson and several other men were badly gassed and evacuated. Ferguson was evacuated to England to recover, but due to the severity of his gassing, was unable to rejoin his unit. He returned to Australia on 19 October, arriving home on 27 December. He was still suffering the effects from the mustard gas and was hospitalised in Sydney for two more years. He was finally discharged from the AIF on 18 December 1920. Ferguson received these stripes in recognition of the number of wounds received in the line of duty.