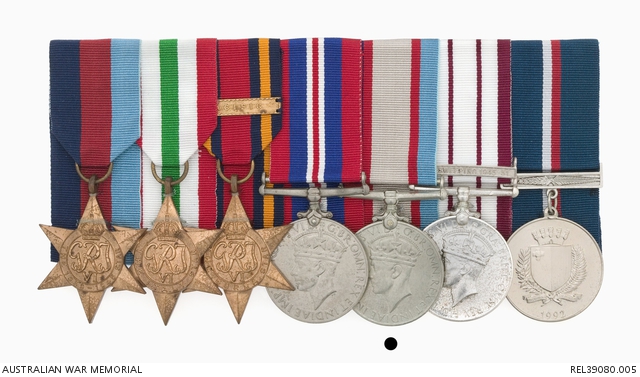 Associated with the service of George Edward Collier Southward who was born at Vaucluse, NSW on 2 February 1920. Southward enlisted for wartime service in the Royal Australian Navy on 22 October 1941 and was assigned the service number S6090. After training as a torpedo man at the shore establishment HMAS Rushcutter, he joined the newly commissioned minesweeper corvette HMAS Cairns as an ordinary seaman on 11 May 1942. Southward remained with HMAS Cairns until May 1944. The ship was initially engaged in escort, anti-submarine and minesweeping duties in Australian waters. In November 1942 Cairns began a period of patrol and escort duties in the Indian Ocean, based at Kilindini in Kenya. At the end of May 1943 she was based at Alexandria in Egypt, undertaking convoy escort duties in the Mediterranean, off Palestine and Lebanon, and along the coast of North Africa to Malta and Gibraltar. After successfully assisting to escort a convoy to Malta in July, Cairns was diverted to Sicily where on 13 July she operated support for Operation Husky, the Allied landings on the island. HMAS Cairns returned to Indian Ocean in September. In February 1944 she was part of a convoy that was attacked by the Japanese submarine RO-110. When Cairns was sent for refit in May 1944, Southward left the ship and was posted ashore in Sydney until January 1945, when he joined another minesweeper corvette, HMAS Lismore, in which he served until 1946. Lismore took part in Operation Iceberg, the landings on the Japanese island of Okinawa, between March and May 1945. After the end of the war, in August 1945, Lismore operated in her minesweeping capacity, clearing mines from shipping lanes. George Southward was discharged from the navy on 12 March 1946.