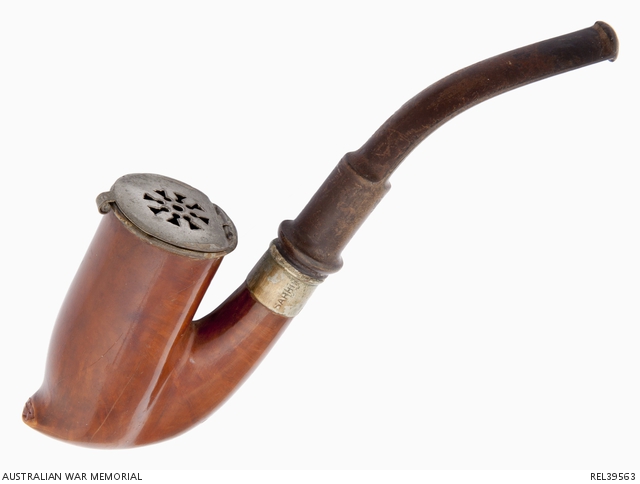 Oom Paul style pipe with full bent neck attached to a threaded vulcanite stem. The pipe has a pierced brass hinged bowl cover and brass stem collar. An illegible name is engraved on the stem collar. The inside of the bowl and stem are coated with tobacco residue.

Related to the service of 369 Private Harold Turner in South Africa from 1900 to 1901 as a member of the Second Contingent of the New South Wales Army Medical Corps. He served as a horse driver with the contingent, which embarked for South Africa on 17 January 1900. They arrived at East London, Cape Colony the following month, and travelled to Sterkstroom, where they were attached to the column commanded by Lieutenant General W F Gatacre.

The practice of distributing medical staff across several units means it is unclear exactly where Turner served in South Africa, but the clasps on his medal indicate that he saw service in the Cape Colony and Orange Free State campaigns, as well as at Johannesburg in May 1900 and at the battle of Diamond Hill in June of the same year.

It is also unclear exactly when Turner returned to Australia. Part of the second New South Wales Contingent returned to Sydney on 8 December 1900, and the rest of the Contingent arrived 8 January 1901. He went on to serve in the militia.