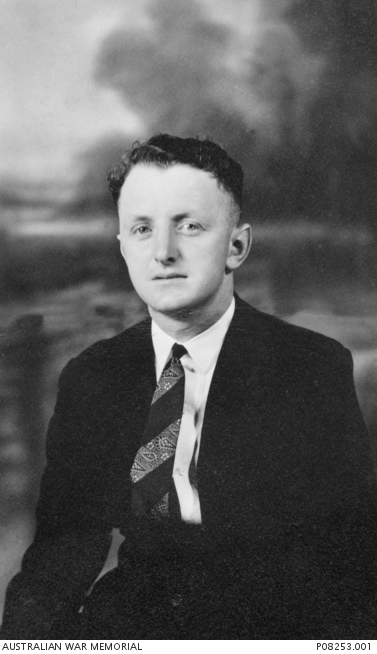 Pre-enlistment studio portrait of VX48525 Private (Pte) Thomas Rex Murphy, 2/2 Pioneer Battalion, of Merino, Vic. Pte Murphy enlisted in July 1940 and served in the Middle East from May 1941 until the battalion was recalled to Australia. They sailed on the Orcades early in 1942. Singapore fell to the Japanese on 15 February 1942 and the 2/2 Pioneer Battalion, and other units on board, were diverted to Java to make a stand. The Australian troops joined up with a battery of American artillery and a British squadron to form Black Force. When the Dutch forces in Java surrendered on 8 March 1942, Black Force was ordered to do the same. Many of the Australian troops, including Pte Murphy became prisoners of war. Pte Murphy died at sea on 15 January 1943, aged 25. He was probably one of 500 prisoners on board the Japanese ship the Nichimei Maru who died when it was attacked and sunk by American aircraft while enroute to Burma.