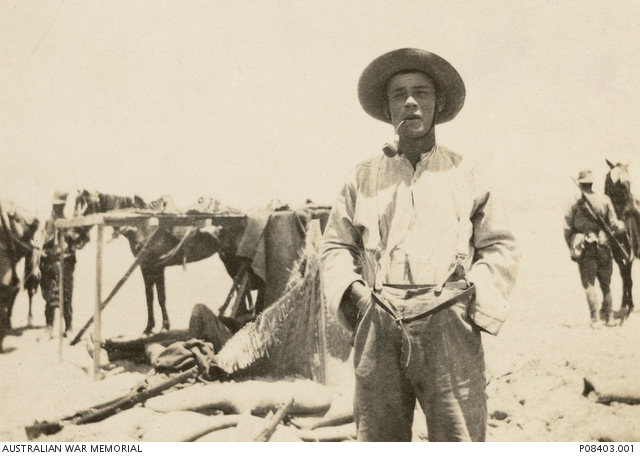 Informal portrait of 355 Private (Pte) William Edward (Billy) Sing DCM, 5th Light Horse Regiment. He is smoking a pipe and standing with his hands in his pockets. Pte Sing was born in Clermont, Qld, in 1886. His father was Chinese and his mother was from England. A horse-driver of Proserpine, Qld before enlisting on 26 October 1914, he embarked from Sydney with A Squadron on 20 December 1914. He became renowned on Gallipoli for his abilities as a sniper, shooting a confirmed 150 Turkish soldiers, and probably as many as 201, from a position at Chatham's Post. He was awarded the Distinguished Conduct Medal (DCM) for "conspicuous gallantry from May to Sept 1915 at Anzac as a sniper. His courage and skill were most marked and he was responsible for a very large number of casualties among the enemy, no risk being too great for him to take." On 5 January 1917, he was taken on strength of the 31st Battalion, with regimental number 355A. He received gunshot wounds twice while serving in France and Belgium, and was awarded the Belgian Croix de Guerre in early 1918. On 21 July 1918, he embarked for Australia, where he was discharged on medical grounds.