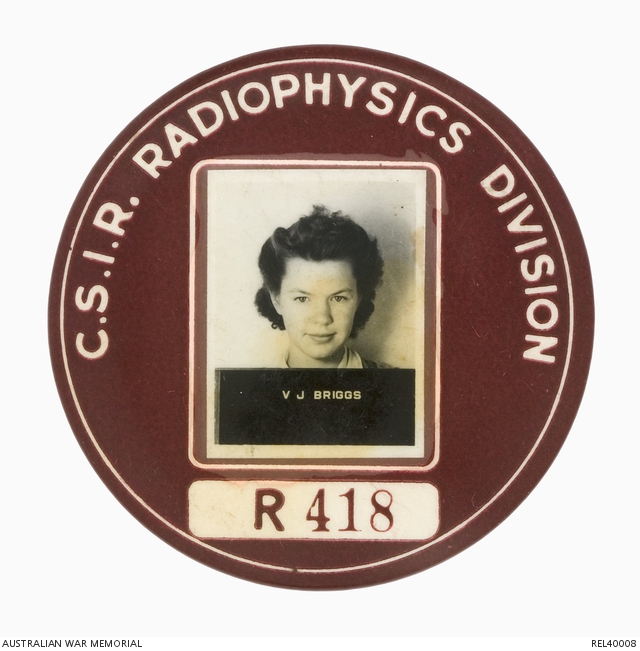 Circular pressed tinplate badge with a celluloid face. The badge is maroon with white and features an identification photo of a girl beneath which is, 'V J BRIGGS'. At the top of the badge are the words, 'C.S.I.R. RADIOPHYSICS DIVISION'. At the bottom of the badge is, 'R 418'. On the reverse edge in white is, 'A E PATRICK PTY LTD SUMMER HILL'. The brooch pin is missing.

Associated with the service of Miss Valerie Briggs with the Radiophysics Division of the Council for Scientific and Industrial Research (CSIR) during the Second World War. Valerie Josephine Briggs was born in Sydney in 1929. She was 15 years of age and had just completed the Intermediate Certificate when she was 'manpowered' to work at the CSIR in 1944. Miss Briggs worked in the Publishing Section of the Radiophysics Division as part of a team of four girls, one of whom was Joan Sutherland. Her duties were focused on the typing, copying and distribution of scientific notes relating to a range of projects including the development of radar systems. Miss Briggs left the CSIR at the end of the Second World War and spent a short period on her father's property in Queensland. Her father, George Albert Briggs, falsified his age to enlist during the First World War and had served as a mechanic with the Australian Flying Corps. He also served during the Second World War as a captain with the 7th Division Corps of Australian Electrical and Mechanical Engineers (AEME) in the Middle East and the Pacific. He was Mentioned in Dispatches (MID) and was recommended for an MBE. He received his discharge in October 1945. After her time in Queensland, Miss Briggs undertook nursing training at Royal Prince Alfred (RPA) Hospital and the Royal Women's Hospital in Sydney. She pursued a career in nursing for 10 years before marrying in February 1961, moving to Queensland and developing a successful furniture retailing business and raising two children.