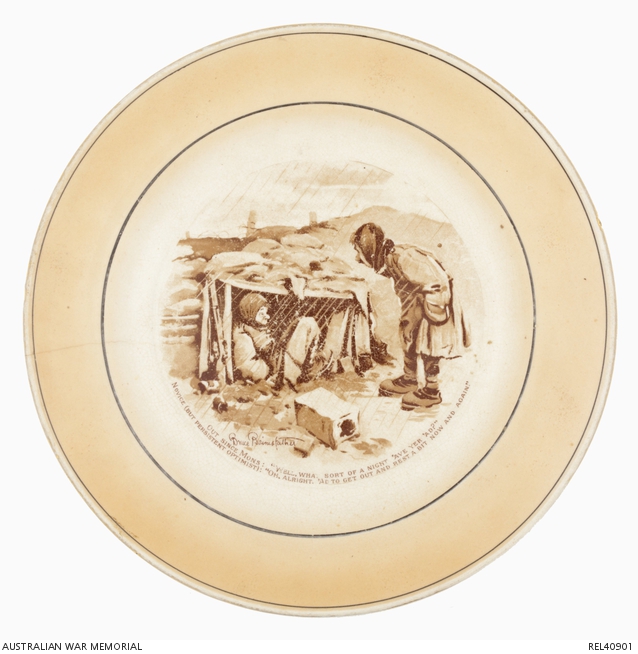 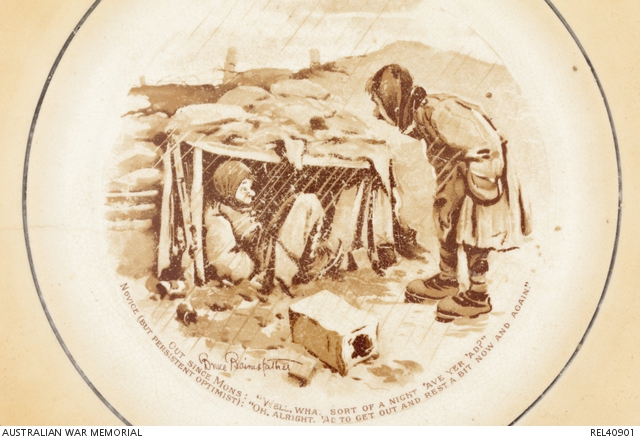 White earthenware plate with a stained yellow border featuring Bruce Bairnsfather's 'The Innocent Abroad' sepia cartoon decal with a clear glaze coating in the centre. The cartoon features one British soldier sheltering from the rain in a dugout, watched by a fellow soldier. A green decal on the reverse of the dish reads 'MADE BY THE GIRLS OF STAFFORDSHIRE DURING THE WINTER OF 1917 WHEN THE BOYS WERE IN THE TRENCHES FIGHTING FOR LIBERTY AND CIVILIZATION', beneath a Grimwade's Ltd maker's stamp.

Grimwades Ltd Souvenir plate purchased in England during the First World War by an unknown AIF serviceman who returned to Australia with the plate. This particular series of Grimwades domestic pottery was popular with servicemen passing through or stationed in England, who were quick to purchase a piece featuring Bruce Bairnsfather's cartoons.

Captain Bruce Bairnsfather was a machine gun commander in the Royal Warwickshire Regiment during the First World War. He served on the Western Front from 1914 until April 1915 when he was wounded from a chlorine gas attack during the Second Battle of Ypres and sustained hearing damage and shell shock. He was removed from front line service and posted to 34th Division HQ where he produced a series of sketches with 'Old Bill' as the protagonist for publication in the Bystander magazine.

The humorous representations of life in the trenches also caught the imagination of the wider public with thousands of pieces purchased as mementos of the Great War for posterity. The Bairnsfather domestic wares offered another fund raising potential and were sold at auctions held to raise money for the war effort.

Near the end of 1917 Leonard Grimwade of Grimwades Ltd was approved to reproduce a selection of Bairnsfather's cartoons from the Fragments From France series on a range of domestic ware by the owners of the Bystander. Grimwades had a steady range of pottery in production at the time and used a transfer technique to faithfully reproduce the drawings on ceramic plates, vases, bowls, cups and mugs.