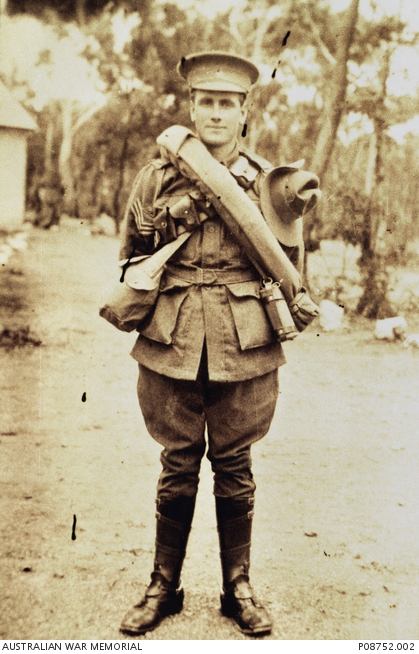 Informal portrait of 20217 Sergeant (Sgt) Clarence Gordon Ranson, 7th Field Artillery Brigade, of Scotsdale, Tas. A bushman prior to enlisting in November 1915, Clarence Ranson embarked with the 8th Field Artillery Brigade, Brigade Ammunition Column, from Melbourne on board HMAT Medic (A7) on 20 May 1916. He arrived in France for service on the Western Front on 24 November 1916. He was promoted to the rank of Sergeant (Sgt) on 1 January 1917. On the night of 7/8 June 1917, near Ploegsteert, Belgium, while the nearby area was being heavily shelled, Sgt Ranson saved six members of an infantry unit from a gas attack. He provided aid and succedeed in getting all to a dressing station. Afterwards, Sgt Ransom suffered the effects of the gas. For his actions he was awarded the Military Medal (MM) on 24 May 1917. Sgt Ranson was killed in action at Passchendaele, Belgium, on 16 October 1917. He was 26 years of age.