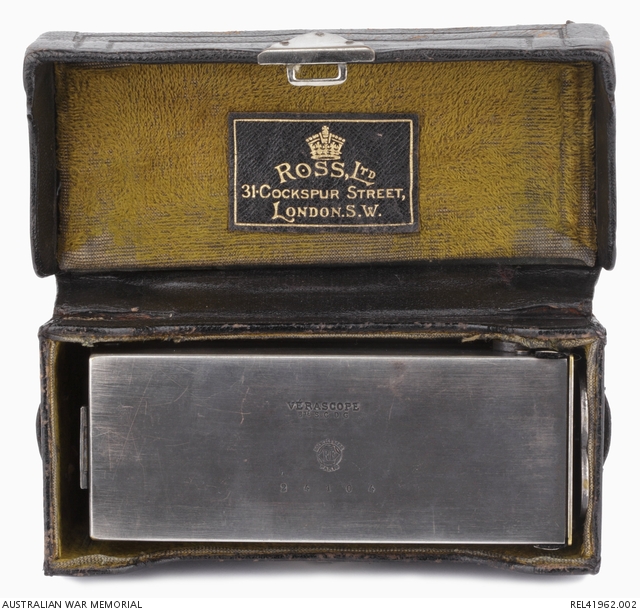 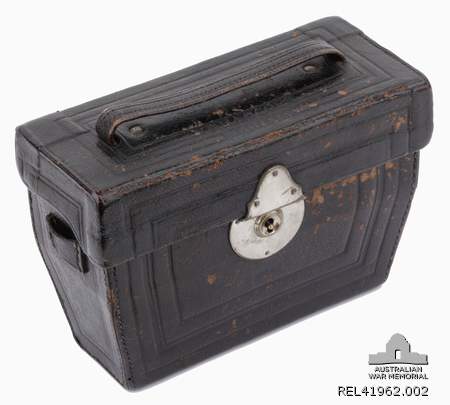 Sewn black leather case with hinged lid, fitted with a lockable nickel-plated brass lock with circular escutcheon plate. There is a carrying handle rivetted to the top of the lid, while three strap loops have been sewn to the sides of the body. The lid is impressed: 'VERASCOPE BREVETTE S.G.D.G.' The interior is lined in green velvet, and a black leather label embossed in gold, reading 'Ross Ltd, 31 Cockspur Street London SW' is affixed to the inside of the lid.

Case for a Verascope stereoscope camera owned and used by 14529 Arthur Dumas Whitling, born 1876 at Parramatta, NSW, a civil servant who was 38 years old when he enlisted on 12 July 1915. Assigned to the Australian Army Medical Corps, Whitling was promoted to Corporal the day after his enlistment and Lance Sergeant (Clerk) on 12 August 1915. He joined the Australian Convalescent Depot leaving from Sydney aboard HMAT Orsova on 14 July 1915.

Although Whitling was promoted to Staff Sergeant on 7 September 1915 and to Warrant Officer Class 1 on 1 March 1916, these appointments were never confirmed, resulting in Whitling's rank and dates of promotion becoming the subject of an internal AIF investigation. The result, in late 1919, was confirmation of his rank as Staff Sergeant but not as Warrant Officer. Whitling had a few things to say about this, and in his correspondence states 'As showing the muddle the records in my case were, I may instance the fact that whilst I held the position of Chief Clerk at the No 1 Australian Aux Hospital, Harefield Park, England, the OC Records London wrote for particulars regarding me, "as we have no trace of this man on record". That was strange, as I was one of the original members of the London Staff and had been paid at Headquarters for over a year!!'

The firm noted on the interior label, Ross Ltd, acted as distributors for Verascope in London prior to the First World War, but made their own range of cameras, optical equipment and barometers. They chaged their name to 'Ross Ltd ' (from Ross & Co) in 1898 and moved to Cockspur Street in 1899.