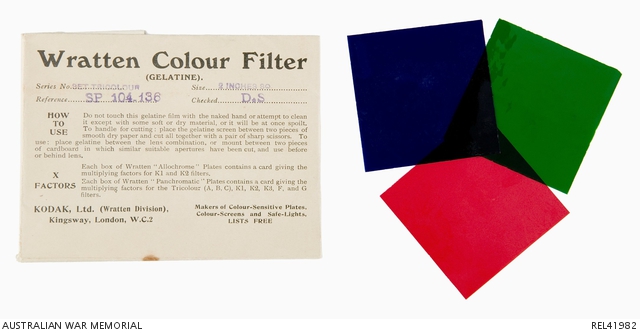 Rectangular paper envelope with the following printed on front: 'Wratten Colour Filter (Gelatine). Series no: Set Tricolour; Size: 8 inches; Reference: SP 104136'. Also lists directions for use, and the comment: 'Each box of Wrattens 'Allochrome' Plates contain a card giving multiplying factors for K1 and K2 filters, and another for the Tricolour (A,B,C), K1, K2, K3, E and G filters.' Contents are sheets of red and green gelatine.

Kodak Autochrome colour filters used by 14529 Arthur Dumas Whitling, born 1876 at Parramatta, NSW, a civil servant who was 38 years old when he enlisted on 13 July 1915. Assigned to the Australian Army Medical Corps, Whitling was promoted to Corporal the day after his enlistment and Lance Sergeant (Clerk) on 12 August 1915. He joined the Australian Convalescent Depot departing from Sydney aboard HMAT Orsova on 14 July 1915.

Although Whitling was promoted to Staff Sergeant on 7 September 1915 and to Warrant Officer Class 1 on 1 March 1916, these appointments were never confirmed, resulting in Whitling's rank and dates of promotion becoming the subject of an internal AIF investigation. The result, in late 1919, was confirmation of his rank as Staff Sergeant but not a Warrant Officer. Whitling had a few things to say about this, and in his correspondence states 'As showing the muddle the records in my case were, I may instance the fact that whilst I held the position of Chief Clerk at the No 1 Australian Aux Hospital, Harefield Park, England, the OC Records London wrote for particulars, regarding me "as we have no trace of this man on record". That was strange, as I was one of the original members of the London Staff and had been paid at Headquarters for over a year!!'