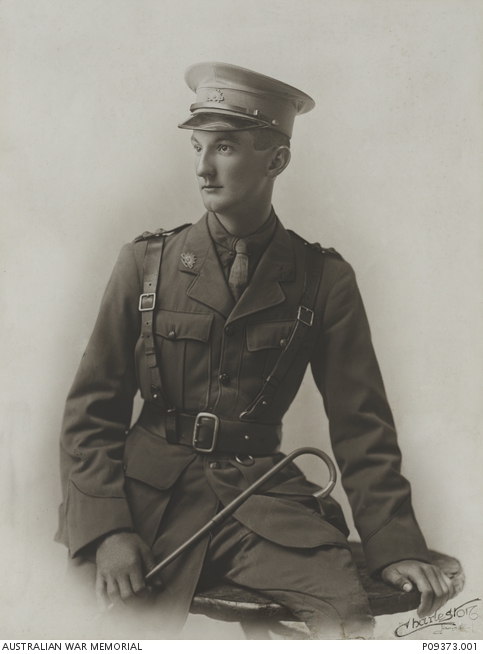 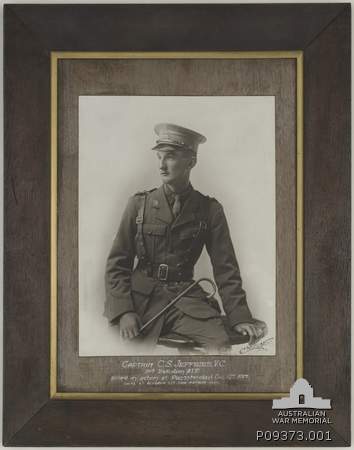 Studio portrait of Lieutenant (Lt) Clarence Smith Jeffries, 34th Battalion, of Wallsend, NSW. Born on 26 October 1897, Jeffries attended Dudley Public School and the Newcastle Collegiate and High schools before being apprenticed to his father as a mining engineer. In 1912 he joined the 14th (Hunter River) Infantry Regiment as a private and was promoted sergeant a year later. Following the outbreak of the First World War he was commissioned second lieutenant on 22 August 1914. He instructed volunteers for the Australian Imperial Force at Newcastle and Liverpool camps, becoming a lieutenant in July 1915. On 1 February 1916 Jeffries, then in charge of the Abermain Collieries surveying department, was appointed second lieutenant in the 34th Battalion, and embarked for England. In August he was promoted lieutenant and in November his battalion moved to the Western Front where he was promoted captain on 26 June. On 12 October 1917, in the attack on Passchendaele during the third phase of the battle of Ypres, his company's advance towards its first objective was held up by two pill-boxes. He organised and led a bombing party which eliminated the obstacle and captured thirty-five prisoners and four machine-guns. He then led his company forward, under an extremely heavy enemy artillery barrage and enfilade machine-gun fire, to the objective. Later that morning the battalion's advance to its second objective was delayed by a machine-gun post. Jeffries led another party to capture the position, enabling the advance to continue, but was killed during the operation. For his service that day he was posthumously awarded the Victoria Cross, for 'most conspicuous bravery in attack'. Jeffries was buried near Passchendaele, in the Tyne Cot military cemetery. He is also commemorated by the Jeffries-Currey Memorial Library at Dudley Public School where William Currey, VC, had also been a pupil.