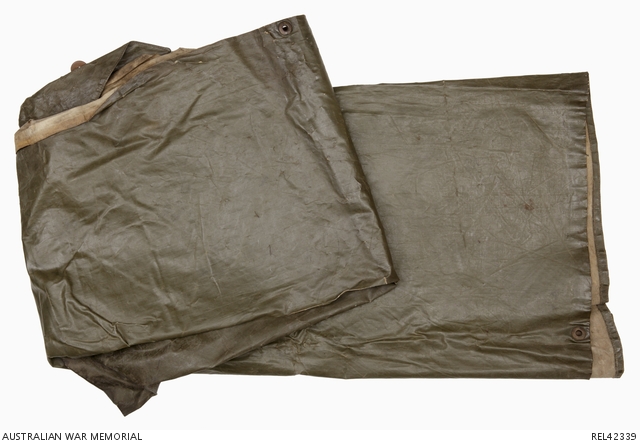 Khaki rubberised cotton gas cape, with stand and fall collar, brown celluloid buttons and brass rivetted holes along four sides. In the edging of the rivets is stamped 'AUSTRALIA OFFICER'S' and some indistinguishable markings. The cape could also be used as a ground sheet or a rain shelter.

Captain Percy Herbert Cherry was born in Drysdale Victoria on 4 June 1895. His family moved to Tasmania when Cherry was seven. When he was about 13 years old, he joined the cadets, eventually becoming a second lieutenant. He travelled to different districts to give drill instructions and won gold for shooting at 16. Cherry later served in the Militia with the 93rd Infantry while he worked as an orchardist at his parent's apple orchard.

Following the outbreak of war in November 1914, Cherry enlisted on 5 March 1915 in Franklin, Tasmania with his father's permission. He was posted to 'D' Company, 26 Battalion and though he had qualified as an infantry officer in the Militia, at 19 years of age he was considered too young and was made a quartermaster-sergeant. Cherry embarked for overseas service on 29 June, arriving at Gallipoli early September. There he became 'D' Company's sergeant major on 13 September.

On 1 December, Cherry was wounded in the face and head by a bomb blast and was evacuated to Egypt. He was appointed second lieutenant while in hospital. After he recovered, Cherry was posted to Tel-el-Kebir for machine gun training which he passed at the beginning of March 1916 and was seconded to the 7th Machine Gun Company.

Cherry arrived with his unit in France on 21 March. He was in the thick of the fighting at Pozieres when he was shot in the neck on 5 August. Cherry was evacuated to London and was promoted to lieutenant. In December, after returning to France, Cherry was posted back to 26 Battalion. He was appointed the rank of temporary captain, which was confirmed in mid February 1917, and placed in command of 'A' Company.

In March 1917, the 26th Battalion were involved in the fighting around Warlencourt and the attack on the German lines at Malt Trench. On 2 March, after the allied bombardment failed to clear the wire in front of Cherry's company's objective, he led them to a gap in the wire and entered the German trenches. While leading his men through the wire Cherry was wounded but continued to fight. He personally captured one machine gun and his men another. Cherry then turned the machine guns on the Germans, who fled when they realised they were being pressed from two sides. For this action Cherry was awarded the Military Cross.

On the morning of 26 March 1917 the 26th Battalion, along with two companies from the 28th Battalion, were tasked with enveloping the village of Lagnicourt, France. Cherry commanded 'C' Company, who were tasked with entering the village itself. The company was split for the assault with Cherry leading one half. The Germans provided fierce resistance and casualties were sustained, including Cherry who was wounded around 6.30 am.

After capturing a farm on the outskirts of Lagnicourt, Cherry moved towards the village centre and saw the Germans using a large crater to defend it. These Germans halted 'C' Company's advance, so Cherry sent for mortars. However, the wait was too long for him and he rushed the crater under Lewis gun and rifle grenade fire. After the crater was taken, the company fought to link up with the rest of the battalion. Once linked up, Cherry sensed the Germans would counter attack and decided to dig in and reinforce his sector.

For the rest of the afternoon the Germans attempted to re-take Lagnicourt under heavy artillery fire. At one point Cherry noticed the German infantry using yellow identification flares to disclose their position to the German artillery. Cherry then used his own yellow flares and saw the German barrage lift off the Australian positions. Despite continued German opposition, they continued to hold their position, but at around 4.30 pm, Cherry and several other men were killed by a German shell. He was initially buried near Lagnicourt, but after the war his body was reinterred in the Queant Road Cemetery at Buissy. For his actions that day, Cherry was awarded the Victoria Cross.