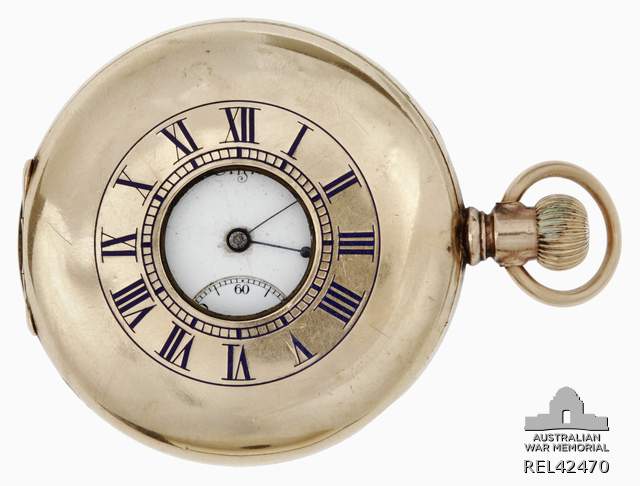 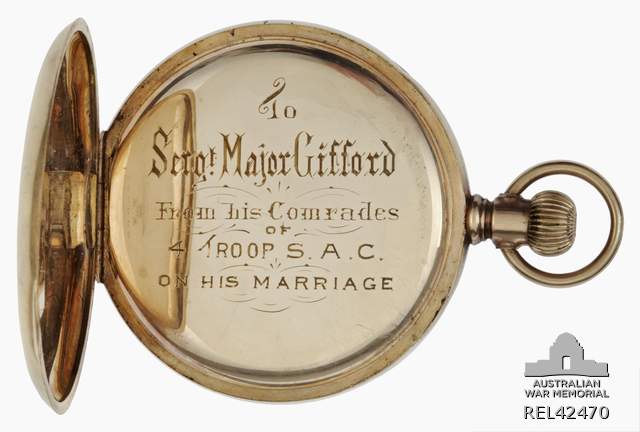 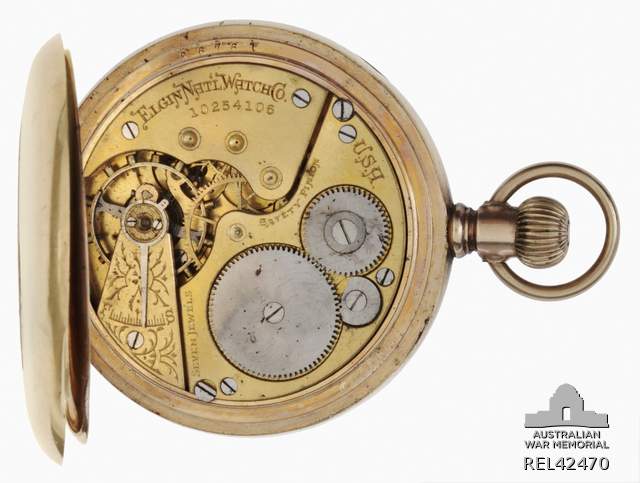 Elgin Class 92, 212 grade Half Hunter pocket watch, made in 1903. Movement serial 10254106; case serial 6896761. Seven jewelled movement in a 14 carat gilded Keystone half-hunter case with blue enamelled clock face on lid. Glass is missing from lid and watch face. The rear of the case proper is engraved 'To Sergt Major Gifford From his Comrades of 4 Troop, S.A.C. On His Marriage'. The mechanism is jammed.

[Full text available in attached document]
Related to the service of Robert 'Bob' Cornelius Gifford, born 1872 at 'Big Bombay', Braidwood to Joseph and Pauline Gifford, Scottish immigrants who were employed as farmhands on the property of 'Manar' from about 1848/49. A platelayer by trade, Gifford had left his home of Reidsdale, midway between Araluen and Braidwood, for work in northern NSW when the unsurprising news of the outbreak of hostilities between the Boers and British in South Africa reached Australia. Tensions had been simmering in the colony for years and reached their boiling point in mid 1899, when the Boers attacked Natal and Bechuanaland. Australian colonies responded to Britain's request for assistance almost immediately, with Queensland offering troops in July, closely followed by New South Wales and Victoria. Each of the colonies ultimately sent between four and six contingents, with the first groups arriving in South Africa between November 1899 and March 1900.

In October 1899 Gifford was working as a shearer in Quirindi, south of Tamworth, NSW. The Sydney Morning Herald (SMH) reported on 11 October that 'two men named Bevan and Gifford left Quirindi by train en route for Natal to enlist in the English Army or Natal police or mounted rifles to fight against the Boers. They have been employed at Knickerbell station and have thrown up their positions to fight for the British. On leaving the shearers cheered them heartily. About 20 mounted shearers formed a guard of honour and escorted them to Pine Ridge, on Mr Dangar's Mooki station, where great enthusiasm was displayed at the final leave taking... Both are good horsemen. [Gifford] spent several years in the New South Wales Permanent Artillery. They have letters to influential officers in the British Army.' The same newspaper reported on 12 March 1900 that both men departed aboard the Aberdeen Line steamer SS 'Salamis', which had just completed its maiden voyage from London via Cape Town to Sydney and left Sydney on its return voyage at 3:00 pm on 13 October 1899 for Natal, Cape Town and London. Gifford and Bevan were accompanied, according to the SMH, by Captain Massey of the British South African Company (possibly an officer of influence). These two Australians claim to be the first to volunteer, embarking for South Africa two weeks before the first official contingents (NSW and Victoria) sailed on 29 October.

Both Bob Gifford and W.F. Bevan were able to join the South African Light Horse (Natal) on 10 November 1899 as a private, the same day the unit was formed under the command of Major the Honourable Julian Byng, previously of the 10th Hussars. It was an exciting time to join - by the end of January 1900 he had fought at the Battle of Colenso at Tugela River, Natal on 15 December 1899, and nearby Skion Kop on 23 - 24 January 1900, both regarded as significant British defeats, but equally where the SALH distinguished itself. Gifford was assigned service number 734 and W.F. Bevan 755.

In a letter to his brother Fred on 7 February Bob Gifford related 'I am alive and well. No doubt you have read a full account of the great battle that was fought at Colenso on the River Tugela. Our loss was terrible. It was something like 1,150 men killed, wounded or taken prisoner.