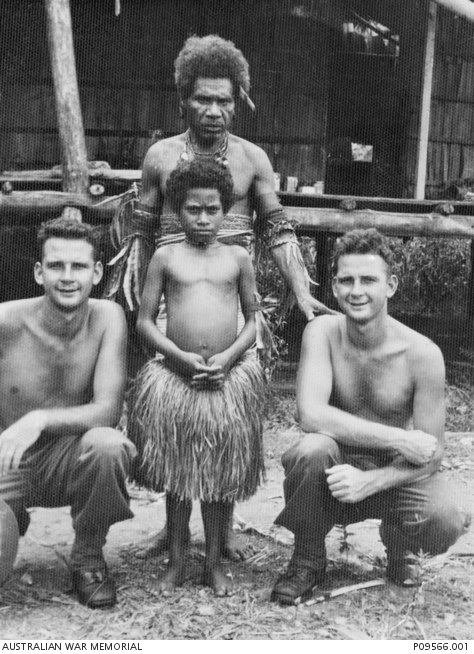 Informal portrait of identical twins VX92511 Sapper Clive Robinson Coram (left) and VX92512 Sapper Jack Berry Coram, 1 Welding Platoon, Royal Australian Engineers (RAE), with a man and child from a local village. The brothers had been boilermakers in civilian life. They enlisted together on 29 May 1943 and were issued with consecutive service numbers. Their older brother Milton Coram, a photographer by profession, worked as a paybook photographer during the war. Prior to the twins' embarkation for overseas service Milton provided them with a 35mm camera to document their service. Together they served in the RAE in New Guinea where their work included the construction of oil tanks and pipes at Milne Bay. Later they served in Labuan, Borneo, constructing boilers, repairing oil tanks and machinery and working on pipes. The brothers returned to Australia together and were discharged from 1 Welding Platoon on 9 April 1946.