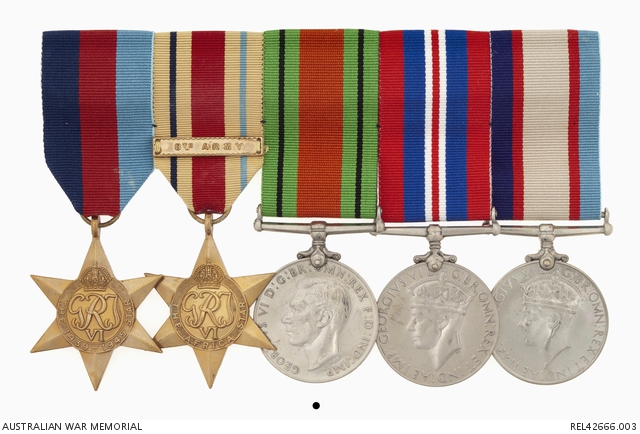 Associated with the Second World War service of Lance Bombardier Ronald James Ware. Ware was born in Zeehan Tasmania on 26 June 1917 and enlisted as a gunner in the 7th Heavy Battery, Royal Australian Artillery (RAA) on 6 June 1939. He had previously served in the militia with the 12th/50th Battalion (Launceston Regiment) and the 117th Heavy Battery RAA.

After transferring to the Second AIF on 22 May 1940 Ware joined 2/8 Field Regiment. He embarked for the Middle East on 16 November aboard HMAT Strathmore arriving in Egypt on 17 December.

Ware attended 1 Australian Corps School of Signals from 20 April 1941, rejoining his unit on 13 May. He was evacuated to 2/7 Australian General Hospital (AGH) on 6 November suffering dysentery but was transferred to 2/1 Australian Convalescent Depot (ACD) on 2 December. He was discharged on 29 December and marched out to the Australian Artillery Training Regiment, rejoining the 2/8th Field Regiment on 8 January 1942.

The 2/8th moved to Syria in January 1942 where they built gun sites along the high positions overlooking the coast of Jdaide. By the middle of the year the Australian 9th Division had been moved to El Alamein with the 2/8th reaching the Alamein front on 5 July.

Taking up a position at Ruweisat Ridge the 2/8th was involved in heavy fighting between 10 and 12 July, with Ware suffering a gunshot wound to his right shoulder on 11 July. He was admitted to 42 British General Hospital but was transferred to 2/6 AGH on 22 July. He was evacuated to 1 ACD on 14 August before being discharged to the Australian Artillery Training Battery on 17 August. He rejoined his unit on 2 September, which was still in action supporting Operation Bulimba. The 2/8th went on to fight in the main Alamein offensive at the end of October and into the start of November.

Through late November and much of December, Ware spent most of his time in hospitals or convalescent depots sick. Ware returned to Australia with the rest of his unit on 31 January 1943, arriving in Melbourne on 25 February. After a period of leave the 2/8th moved to Queensland in April for a year long training period.

Appointed Lance Bombardier on 18 October, Ware was evacuated to 80 Australian Camp Hospital on 2 August 1944 suffering constant neuropathy. He was re classed medically unfit on 15 August and transferred to the General Details Depot, Brighton Tasmania on 16 October for formal discharge from military service. Ware was discharged from the Second AIF on 15 November 1944.