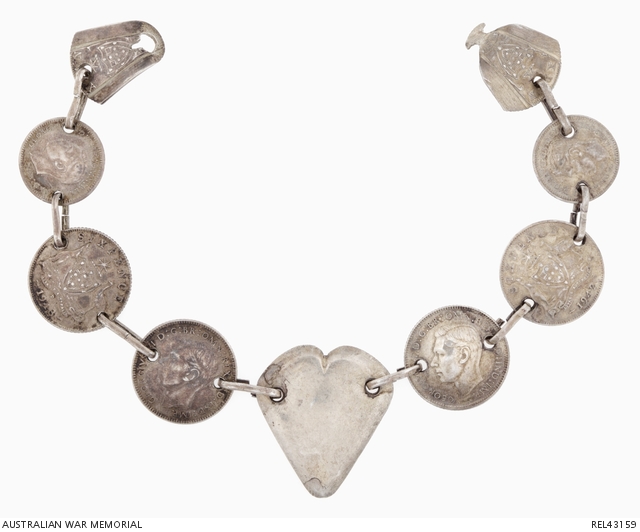 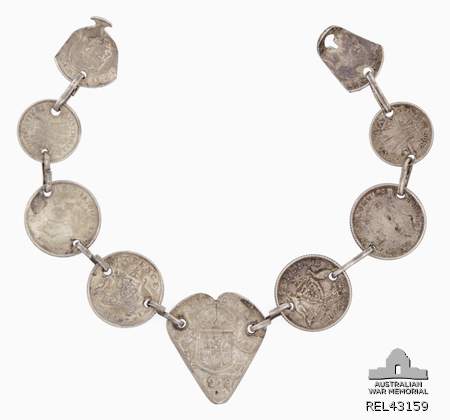 Sweetheart bracelet made from an Australian florin and domed sixpence and threepence coins joined at the sides by strips of aluminium passing through a drilled hole. Mounted in the centre of the bracelet is a florin cut into a heart shape. The obverse has been ground smooth and the reverse shows the word, 'FLORIN' the shield from the coat of arms and the date '1943'. There are six sixpences (dated 1942 and 1943) and two threepences (dated 1943) employed. Four sixpences bear a 'D' below the 'Advance Australia' scroll on the obverse, indicating they were minted at the Denver Mint, Colorado, which assisted with Australian coin production in 1942 and 1943. The two end sixpences have been cut and drilled to form a hook and eye to secure the bracelet.

This and another bracelet (REL43158) were purchased for $US10 by Lieutenant Mark Bell, US 32nd Infantry Division from an Australian soldier (possibly from 3rd Battalion) on Buna Beach, Papua in 1943.

Born in 1920 in Oakland, California USA, Mark Bell joined the US Army on 8 September 1942 in San Fransisco, California. Private Bell successfully applied for officer training and was posted to Officer Candidate School (OCS) at Fort Benning, Georgia where he graduated with the rank of Lieutenant on 22 March 1943. Lieutenant Bell saw service in New Guinea and the Philippines with the 32nd Infantry Division and served in the US Army until his retirement as a Lieutenant Colonel in 1980.