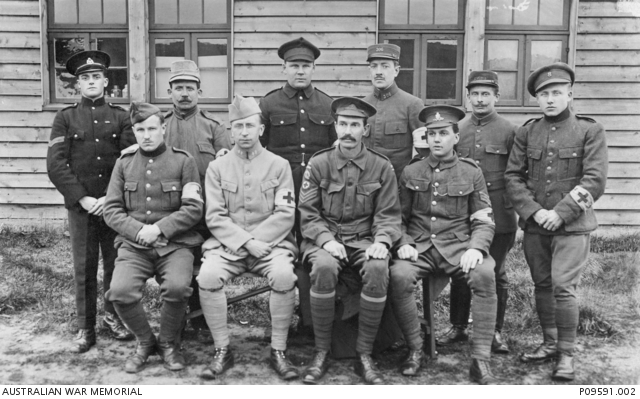 Outdoor group portrait of ten allied Prisoners of War (POW) at Güstrow POW Camp, Germany. Identified seated third from the left in the front is 1012 Staff Sergeant (S Sgt) Alcon Benjamin Webb, Australian Naval and Military Expeditionary Force (AN&MEF), from Lismore, NSW. A 30 year old male nurse prior to enlisting on 21 July 1915, he embarked for Rabaul, Papua New Guinea, as a Private with the Army Medical Corp from Sydney aboard SS Te Anau on 20 November 1915. After arriving in Rabaul, he was promoted to Sergeant in December 1915 and to Staff Sergeant in January 1917. While returning from furlough in Australia in August 1917, he was captured onboard SS Matunga in the Pacific Ocean. The SS Matunga was sailing from Sydney to Rabaul, when the vessel was captured by the German Navy raider SMS Wolf on 6 August 1917. SMS Wolf escorted SS Matunga north west to Offak Bay on Waigeu Island (now West Papua, Indonesia) and a fortnight after arriving there, unloaded personnel and cargo and sank the ship. The crew and passengers from SS Matunga were taken aboard the SMS Wolf, eventually landed at Kiel, Germany, some six months later, and were then interned at a POW camp at Güstrow. S Sgt Webb was repatriated to England in October 1918 and arrived back in Australia on 25 July 1919. The handwritten note on the reverse of the postcard reads "Sincerely Yours, Alcon Webb. 9/5/18." One of a series of 157 images from the collection of 4199 Sergeant William Charles Groves, 14th Battalion, an Australian prisoner of war held at Güstrow POW camp in Germany.