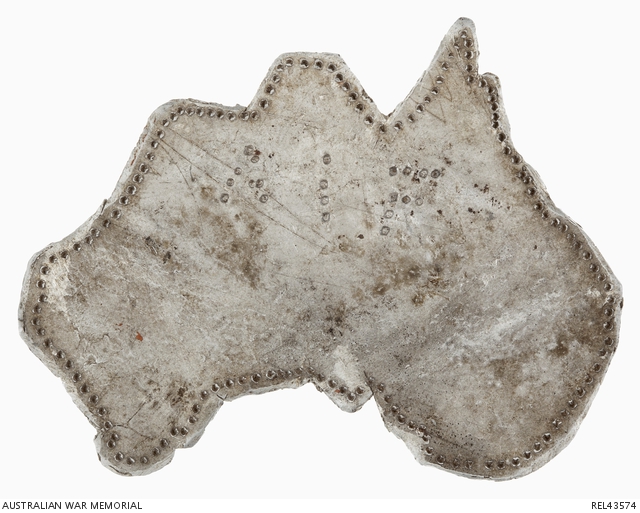 Map of Australia cut from a piece of tin with 'AIF' impressed by hand.

Token in the shape of a map of Australia possibly made by Corporal P W Chanter.

Percy William Chanter was born at Exeter, England in 1891. After emigrating to Australia he was working as a farmer near Cairns, Queensland when he enlisted in the AIF on 18 March 1916. After initial training he was assigned to 47 Battalion as a Private with the service number 2146, and embarked with the 4th Reinforcements aboard HMAT Boorara (A42) at Brisbane on 16 August 1916.

Chanter was present during the German Spring Offensive in 1918, when his battalion fought off a series of German attacks around Dernancourt. He sustained a gunshot wound to his right hand on 27 March, which saw him hospitalised in England. The wound was such that he ultimately lost the use of his right hand ring finger, which subsequently had to be amputated, rendering him unfit for active service. Chanter was sent home, leaving England in September 1918. He was en route to Australia when the Armistice was signed, arriving at Melbourne on 26 November and then returning to Brisbane. He was discharged from the AIF in March 1919.