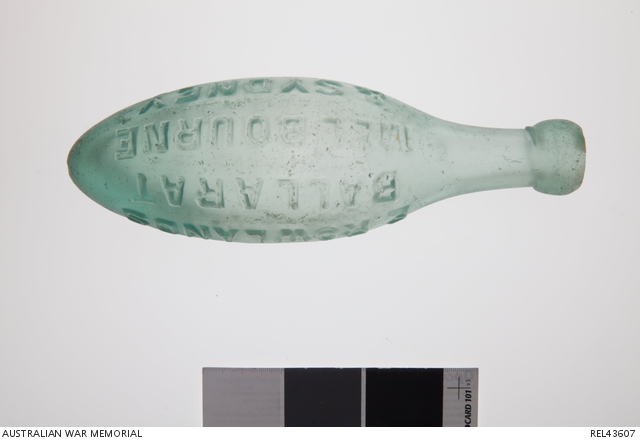 Pointed end soda or aerated water moulded glass bottle with a bulbous collar (slightly uneven in application) with the words 'E. Rowlands / Ballarat / Melbourne / Sydney' moulded vertically into one side in large capitals, with the other side displaying an illustrated trademark featuring a miner and a farmer standing together with their tools, over a faux coat of arms of a lion couchant and unicorn trippant either side of an upright oval panel topped by a crown, over the words 'Trade Mark'. The bottle is from clear glass, but some pearling has developed at the top of the neck. A small pontil break is evident on the pointed base.

Glass bottle used as a message container by 3902 Martin James 'Mart' Young, a railway employee of Brown Hill, Ballarat, Victoria, who enlisted on 4 May 1916 aged 33. Assigned to the 9th reinforcements of 29 Battalion, AIF, Martin enlisted with his brother Leslie John 'Jack' Young, also of Ballarat (both lived with their widowed mother), who was allocated the service number 3901 and was also placed into 29 Battalion. After initial training in Geelong, the brothers embarked for overseas service aboard the transport 'Commonwealth' which departed from Sydney on 19 September 1916, when Martin was made acting corporal for the duration of the voyage. Six days later, whilst still within Australian waters and heading for Perth, Private Martin Young wrote a short note to his sweetheart, Kate 'Kit' Harris, jammed it into this soda bottle and hurled it overboard. The note (see PR04894) states

'Will finder kindly send this note on to: Miss Kate Harris, Park Mansions, Park St, South Yarra, Vic, Australia. Fond love to Kate all well. Both Jack & myself on sea between Adelaide and South Africa xxxxxxxx. Finder will you please communicate to me where you found [?]...send our thanks. Corporal Mart Young 9/29 Battalion, 8 AIF Brigade, AIF Abroad. 25/9/16 at sea'

Martin and his brother Jack disembarked at Plymouth on 14 November; Martin underwent Lewis Gun training at the Musketry School of Instruction at Tidworth from 1 January 1917, and from the completion of this course on 25 January until late November 1917, Martin was attached to the Permanent Cadre of either 8 or 15 Training Battalion at Codford, 'to complete establishment'. On 31 December he was transferred to France to join 29 Battalion, joining them on 5 January 1918 and reverting to the rank of private. However, ten days later he was admitted to Cheltenham Hospital with gastritis and was admitted to hospital with the same condition on 2 March, 27 March, 29 March, 23 August and 4 September and was in hospital when the war ended. He remained on staff at No 2 Group, Tidworth through 1919 and early 1920, rising from temporary sergeant to temporary warrant officer class 1 by March 1919.

Given his close association with hospitals, it is maybe not surprising that Martin met and, in February 1919, married an English nurse, Elsie Maude Hinton, of Wilton. He did not return to Australia until late March 1920, aboard the transport 'Wahehe', disembarking at Melbourne on 20 May. His brother Jack had been discharged from service in late 1917 with persistent infected feet and bunions.

In 1967, 14 year old Karen Maunders and her father Bob were mustering cattle in an inaccessible swampy section of coastline at Broke Inlet near Walpole, south of Perth, Western Australia, when Karen noticed this bottle lying in the sand, its neck plugged with sand. They brought it home and once word got out about their find, the media ran stories about the find and the contents of the message - the Young family found out about it when the ABC's 'This Day Tonight' ran a story.

Eventually the bottle and message went to the Museum of Western Australia, which passed it on to Kate Harris - the original addressee - in 1971. She was delighted to finally get the letter her sweetheart had written over 50 years earlier, and commented 'Mart was always a cheeky devil', noting they grew up together in Ballarat. 'I went down to the wharf to see him off when he went away to war and I cried all the way home. He wrote to me from France and I wrote to him...but I got engaged to another man, a truly good man who was killed in France and Mart married an English girl.' They never met again and Kate married Arthur Rollason, a baker, and moved to Euroa. Martin Young returned to work at the Ararat Railway Station.