Colonial troops for the Cape: departure of the NSW Lancers 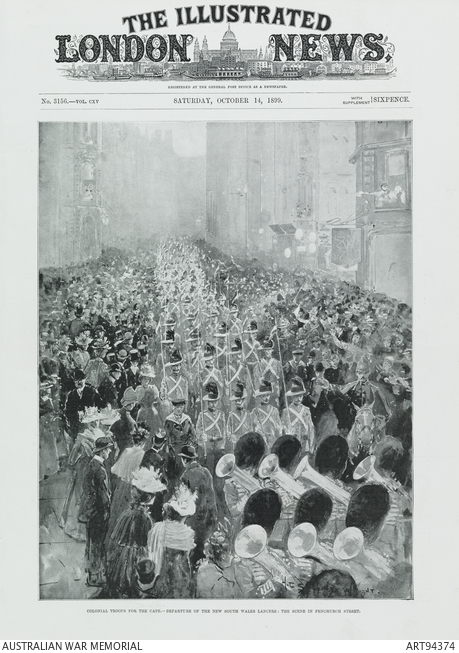 Front page of the 'Illustrated London News', Saturday 14 October, 1899, depicting a scene in Fenchurch Street, London, of the departure of the New South Wales Lancers. The Royal New South Wales Lancers were formed as the New South Wales Cavalry Reserves in 1885, designated the New South Wales Lancers in 1894, and created Royal in 1935. In 1899 the Regiment sent a squadron of Lancers to take part in the Royal Military Tournament held at the Agricultural Hall, Islington, London, (members from the Regiment first participated in this annual event in 1893). When the Boer War broke out, some of the Lancers already in London volunteered for service and became the first Australian troops sent to South Africa. The New South Wales Lancers are still active. No longer an equestrian regiment they are now a motorised regiment operating in Canberra, Goublurn and Parramatta. The 'Ilustrated London News' was first printed in 1842 and, together with 'The Graphic', is recognised as one of the finest pictorial examples of British publishing that is an historic and social record of world events up to the late 20th century. This photogravure has been attributed to Wright, and it is likely to be the artist H.C. (Henry Charles) Wright, who was a sketch artist employed by the 'Illustrated London News'.