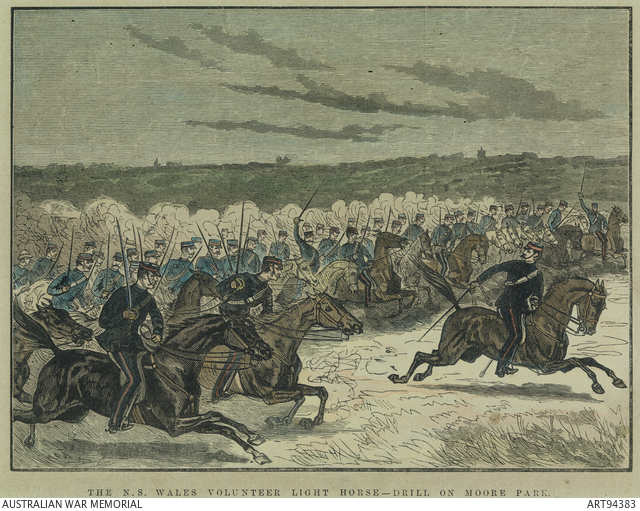 This engraving published in the 'Illustrated Sydney News' Saturday 6 June 1885 shows the NSW Volunteer Light Horse performing a drill on Moore Park, Sydney. In early 1885 there was a concern that the number of mounted soldiers that could be raised in NSW was inadequate and the formation of a troop of light horse, or dragoons was initiated under the command of Captain Macdonald (ex- dragoon who had served with Imperial Forces in India). All volunteers members provided their own uniforms, horses and covered the general expenses of the force while the Government provided arms. In this case a sword, pistol and short cavalry rifle. Its members were reported to be ' ... all fine, active, well-set young men, not too heavy, but just the sort of fellows for light dragoons. Their horses are well bred, with plenty of pluck and condition, and would not by any means disgrace a crack hussar regiment. The men are assiduous at drill, and under the able hands of Sergeant - Major Thompson have made much progress.'
While the NSW Volunteer Light Horse did not see active service in the Sudan they made up a guard of honour for the Governor during the embarkation of the NSW contingent in March 1885 and are clearly visible in Arthur Collingridge's large painting of the event (ART16593). They also took part in the reception of the troops on their return. The 'Illustrated Sydney News' (1853 - 1889) was a monthly publication similar in formatt to 'the Graphic' and the 'Illustrated London News'. It was published monthly by Messers. Gibbs, Shallard and Company, one of the largest printing and publishing companies in the Colonies, who employed artists and illustrators of a high artistic standard. Such as C.H Hunt and Francis Morley.