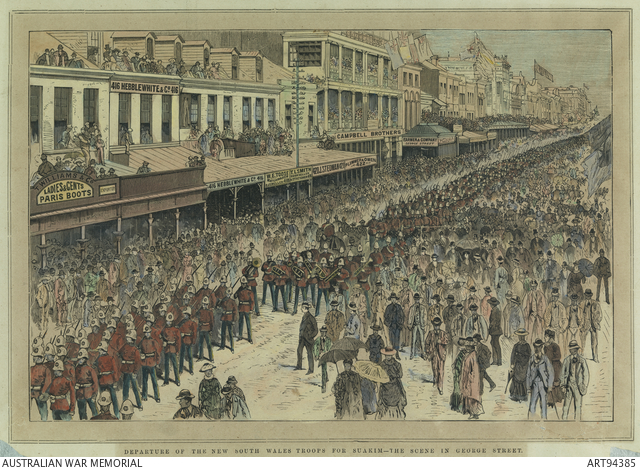 Published in the Saturday 11 April 1885 issue of the 'Illustrated Sydney News'. This engraving shows a view of the NSW Contingent moving along George Street, between King and Market Streets, en route to Sydney Cove where they embarked on the transport ships SS Iberia and SS Australasia for the Sudan. The artist worked from a photograph taken by Scott of George Street. The troops were the main attraction of the military pageant marching from Victoria Barracks to Circular Quay. A contemporary Journalist wrote '...From crowded balconies, parapets, and thronged pathways, went up a great shout, as the procession with difficulty, owing to the density of the crowd moved on. ...The Soudan boys were especially marked in the matter of floral favours, and touching scenes of parting were visible on all sides. As the procession entered College street spectators, in tens of thousands massed in Hyde Park...Mottos of various and fitting kind were displayed amongst them - "For England, Home and Gordon" "Well done, NSW" The column moved along Park, George, and Hunter Streets and Macquarie Place...'