The embarkation of the NSW Troops for Suakim 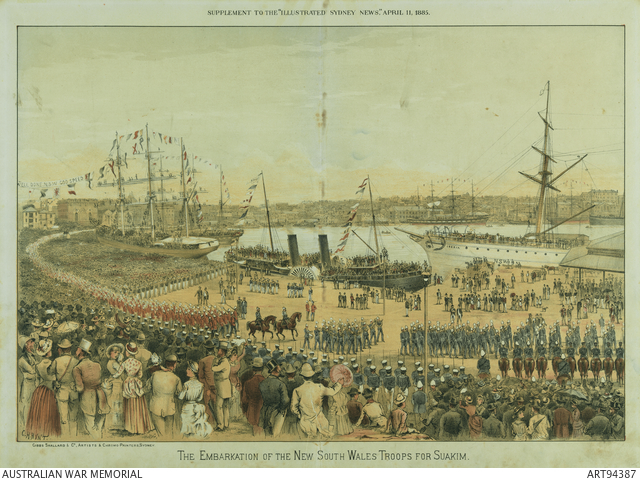 Published by ' the Illustrated Sydney News' as a special colour supplement to mark the dispatch of the NSW Contingent from the Sudan on 3 March 1885. It was published in the Saturday 11 April 1885 issue. Later a companion picture depicting the return of the Troops was also published with the intention that ' ..The two together will form memorial pictures and a lasting record of the beginning and end of the most memorable event that has ever yet taken place within the brief history of Australia since its settlement, now nearly one hundred years ago.' The artist has captured the Embarkation of the Troops from the eastern side of Sydney Cove. '...The transport S S Iberia, with the contingent embarking is shown; the Naomi steamer, ahead of her, thronged with privileged persons, including many members of Parliament...next again is the clipper ship Centurion, dressed with bunting, and hard by, opposite Messers. Mort and Co's Wool Stores, is the ship Scottish Bard...The Circular quay was crammed with spectators; roads, pavements, housetops, windows, balconies, were alike thronged with men, women and children. It was a splendid and touching sight as the cotege passed through the spacious thoroughfare, amidst the acclamations of the people, the popular marshal music of the bands. The whole length of the route from Victoria Barracks, was thronged, and everywhere flags and banners...The pageant on 3rd March will be looked back upon as the bright red letter day in the military and local history of the colony.'