Will this happen again? This street votes NO 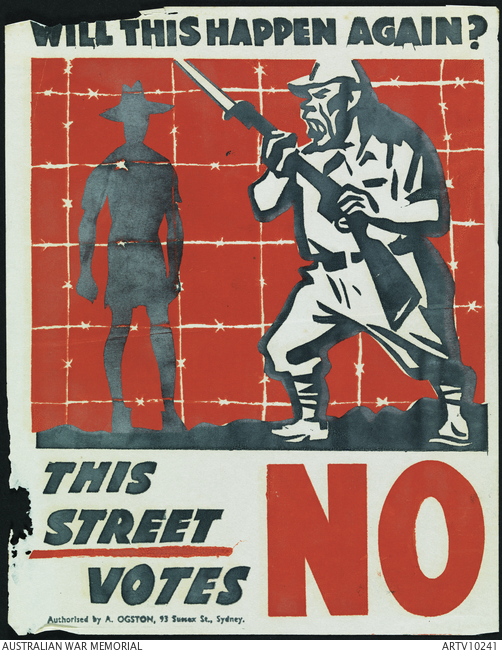 One of two handbills in the collection published by the Australian Communist Party (CPA) in Sydney to urge Australians to vote 'No' in the 1951 referendum held while Australians were serving in the Korean War.

In 1951 the Liberal government of Robert Menzies tried to ban the Communist Party of Australia (CPA), first by legislation that was declared invalid by the High Court, then by referendum to try to overcome the constitutional obstacles to that legislation, but the referendum was narrowly defeated.

This handbill was authorised by Adam Ogston a leading member of the CPA in Sydney throughout the 1940s and 50s. His movements were followed by ASIO and he was charged with distributing seditious literature from the shop where he lived in 1941. He stood as a CPA candidate in the state elections of 1943 and 1946 for the seat of Lang. In 1953 Ogston was one of the last group of CPA members to be unsuccessfully prosecuted for sedition.

Printed in red and black only the design features the silhouette of an Australian POW standing behind barbed wire. In the right foreground is a racially stereotyped caricature of a Japanese prison guard. Both are set against a bright red background. It is an example of the use of images relating to Australian experience of the Second World War in support of political debates and evidences the ongoing impact of the War in shaping the political landscape of the 1950s. A time when Australians were again involved in conflict (Korean War).