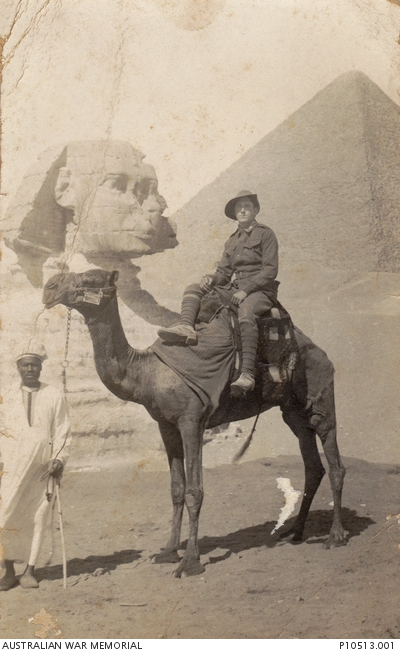 Outdoor portrait of 953 Private (Pte) Alfred (Alf) Howarth, 1st Battalion, seated on a camel in front of the Sphinx and great pyramid of Giza. Pte Howarth, a clerk from Marrickville, NSW enlisted on 19 August 1914, aged 21. Both he and his younger brother brother Pte Henry Joseph Howard, 1st Battalion, who enlisted three days later, sent similar postcards home to their friend Victor Sleep, taken whilst they were at Mena Camp, in Egypt. Recently promoted to lance corporal, Alfred Howarth took part in the Gallipoli landing on 25 April. He survived the Dardenelles campaign and was promoted sergeant (Sgt) on return to Egypt. The battalion was transfered to France, where Sgt Alfred Howarth was killed during an attack on the German positions at Pozieres, from 22-25 July 1916. His brother Pte Henry Joseph Howarth, also with the 1st Battalion, was killed at Gallipoli on 19 May 1915. See P10618.001.