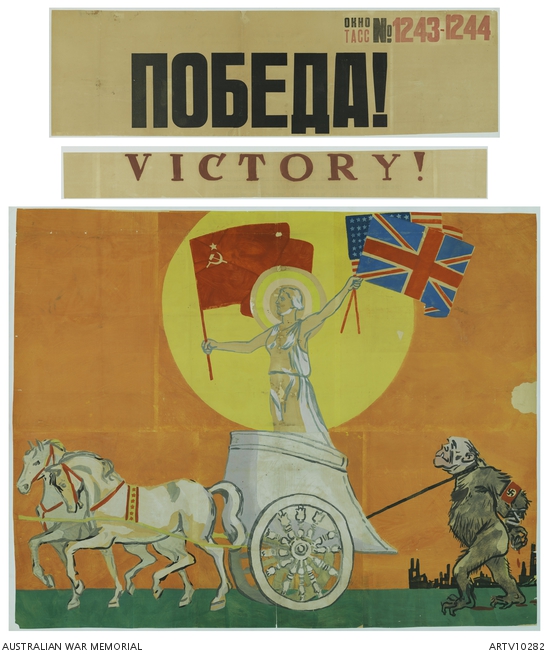 Large, hand stencilled poster produced by the Telegraphic Agency of the Soviet Union (TASS) propaganda studio in Moscow at the end of the Second World War. This poster was designed and distributed approximately two weeks following the suicide of Adolf Hitler and four days after Germany surrendered to the Soviets on 12 May 1945. The central image features a personification of 'Victory' as a classical goddess standing in a white horse drawn chariot. In her right hand is the flag of the Soviet Union and in her left are the flags of the United States and Britain. A bloody gorilla wearing an armband with a swastika is chained to the rear. In the background a large yellow sun rises over blackened ruins set against a striking orange sky.

The poster is in three sections with the TASS poster number (No.1243) and Russian title detached from the main image. The poster lacks the bottom section with the message. Produced in an edition of 850 in its original state TASS No.1243 includes the following text by Ivanovich Lebedev-Kumach (1898-1949) printed in black ink positioned in the bottom centre: May this day remain throughout the ages /A union of friendship, glory and valour!/ The Fascist beast is forever turned to ash. /Victory has come! And in her hands/ The flags of the free peoples proudly /wave. /The world has never seen such victories!/ Honour to our heroes! Greetings to our/Allies!. In this case the Russian text has been cut away and re-used by painting the title 'Victory!' in English on its verso. The poster was souvenired in Odessa, Ukraine and it is likely that this adaptation was made to directly target allied servicemen in Russia at this time.