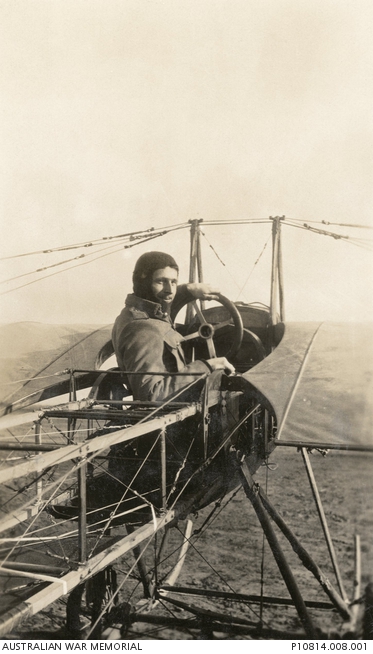 Captain Philip Willington Stell (also Phillip Wellington Stell) seated in the cockpit of a Deperdussin training aircraft. A simple steering wheel is used for control and only one instrument, a glass oil pressure display, is located in the cockpit. Philip Stell had served with the 38th Infantry (militia) in NSW before tranferring to the Australian Flying Corps (AFC) and qualifying for a pilot's certificate at the Central Flying School in 1916. He was allocated to the AFC Reserve, Class A. In civilian life Stell worked with the Ambulance Service in Sydney from 1914, reaching the rank of Superintendent of the St George Ambulance. The Stell family have had continuous ambulance service since 1914. (This photograph is from the album of Captain James Brake, No. 2 Squadron, AFC. See P10814)