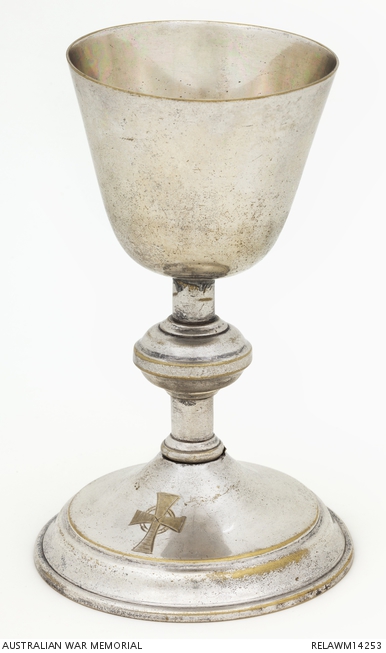 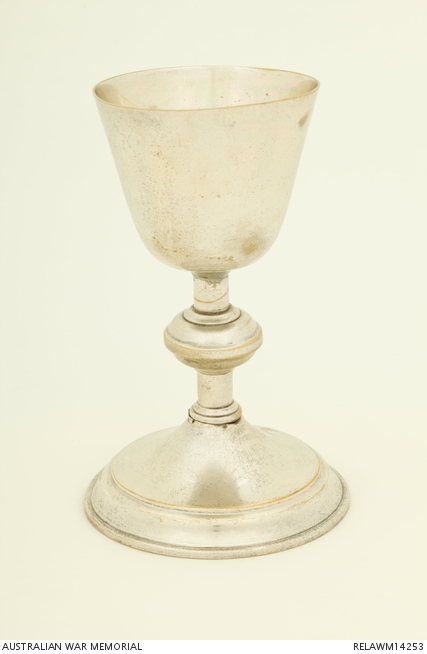 Silver plated brass chalice from a communion set. A celtic cross is engraved on the base.

Albert Edward Talbot was born at Salford, Lancashire, England in 1877. He worked as an estate agent before winning a scholarship to Emmanuel College, Cambridge, where he studied theology. He was ordained an Anglican priest in 1906.

In 1912 Talbot was appointed dean and archdeacon of Sydney. He was a powerful preacher who generally espoused low churchmanship. He was keenly interested in the social problems of his day as well as Labor politics. Talbot was already the senior Anglican chaplain of 2nd Military District (NSW) when he joined the AIF on 1 September 1914. He married Adrienne Vert on 5 September and three days later was appointed a senior Anglican chaplain (Chaplain,1st class) in the AIF, with the rank of colonel, attached to the 3rd Battalion, 1st Infantry Brigade. Talbot sailed on HMAT Euripides with the first convoy of troops to leave Australia, on 20 October 1914.

On Gallipoli he developed a strong rapport with the troops and like many of the Gallipoli chaplains demonstrated a strong ecumenicism. He used this chalice to administer Holy Communion to the men of his battalion on 5 August, the eve of the battle at Lone Pine. Talbot was himself slightly wounded at Lone Pine but refused to leave the line. On 21 October he was evacuated sick to Malta, then to England.

Back in Egypt at the beginning of 1916 he returned to Australia aboard the Star of Malta, as accompanying chaplain to some of the sick and wounded from the Gallipoli campaign. He arrived in Melbourne on 29 February and his appointment with the AIF was terminated 3 weeks later.

Talbot resumed his duties as Dean of Sydney, and as senior Anglican chaplain to 2nd Military District. He retired from the latter post in 1933. In 1916 he was appointed president of the Returned Soldiers' Association. He died in 1936.