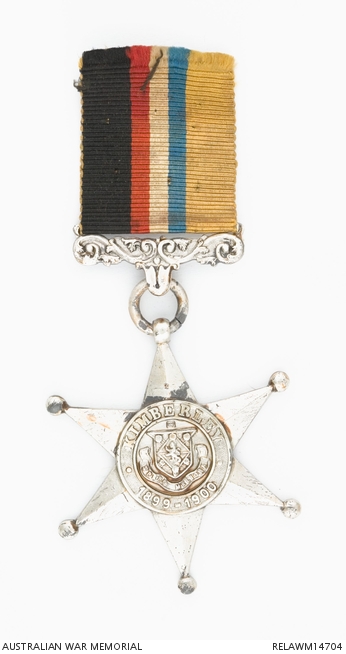 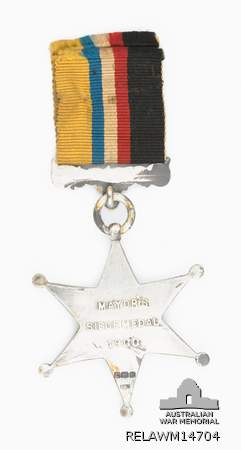 Kimberley Star. Six pointed star with a ball on each point. Obverse: In the centre, the coat of arms of Kimberley with the motto, 'SPERO MELIORA' on a banner and surrounded by a circular band that has 'KIMBERLEY' above and '1899-1900' below. Reverse: Plain except for the words, 'MAYOR'S SIEGE MEDAL 1900' in raised capitals. Stamped on the lower point is a Birmingham hallmark with the letter 'c' and the manufacturer's mark 'AHD'. The medal is fitted with an ornate straight suspender bar that is attached to the uppermost ball of the star by a ring. A piece of 26 mm of ribbon of equal stripes of red, white and blue in the centre, with a band of black to the left and yellow to the right.

Issued unnamed by the Mayor of Kimberley to all members of the garrison, or their next of kin, who served 90 days in the town in the siege between 1 October, 1899 and 28 February, 1900. The Star could be accepted by British and colonial troops but not worn in uniform. This medal is part of a collection assembled by the late Hon. Sir Thomas Hughes, Member of the Legislative Council of New South Wales. It was presented to the Memorial in memory of his son, Captain Roger Forrest Hughes, Australian Army Medical Corps, who died of wounds in France on 11 December 1916, and of his grandson, Flying Officer Peter Roger Forrest Hughes, 12 Squadron, Royal Australian Air Force, who was killed on active service while flying in the Northern Territory on 3 October 1942.