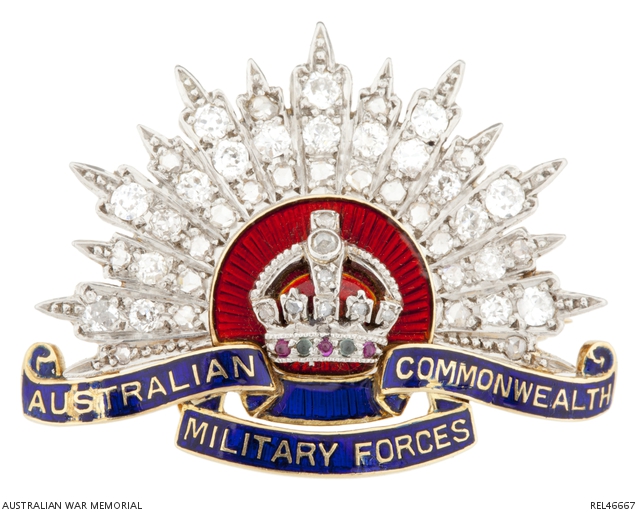 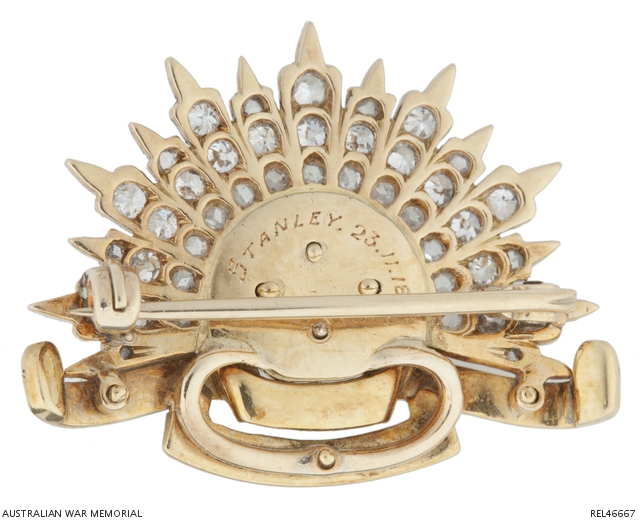 Gold and diamond brooch of the Australian Commonwealth Military Forces 'rising sun' badge in original box. The brooch is in the shape of the sun's rays rising behind a King's crown with the words 'AUSTRALIAN COMMONWEALTH MILITARY FORCES' written in blue enamel scrolls below. The crown is on a red enamel background. The reverse of the brooch is engraved ‘STANLEY 23.11.16’ with a brooch pin back.

This brooch was made for Oswald Deronda Benjamin to give to his wife Marjorie. The brooch commemorates Oswald’s brother Bombardier Stanley Octavius Benjamin who died of wounds on the Western Front on 23 November 1916.

Stanley enlisted in the 1st Field Artillery Brigade on 16 February 1915. He embarked for overseas service aboard HMAT Argyllshire on 10 April and joined the Mediterranean Expeditionary Force on 26 May. Embarking from Alexandria on 14 November aboard HMAT Themistocles for Gallipoli, Stanley was transferred to 3 Battery on his arrival on the Peninsula. Returning to Alexandria after the evacuation Stanley was taken on strength of 21 Howitzer Brigade and posted to Brigade Ammunition Column on 13 March 1916.

Promoted to bombardier on 18 March Stanley proceeded to join the British Expeditionary Force, Stanley embarked form Alexandria on 25 March arriving in Marseilles on 1 April. He was taken on strength by the Divisional Ammunition Column and posted to Number 4 Section on 15 May. He died of wounds on 23 November and is buried at Dantzig Alley British Cemetery, Mametz.

Oswald Benjamin also saw active service during the First World War. He enlisted in the 6th Field Artillery Brigade in October 1915 and saw service on the Western Front from March 1916 until May 1918 when he suffered a gunshot wound to the left thigh. He rejoined his unit just before the Armistice and returned to Australia in April 1919.