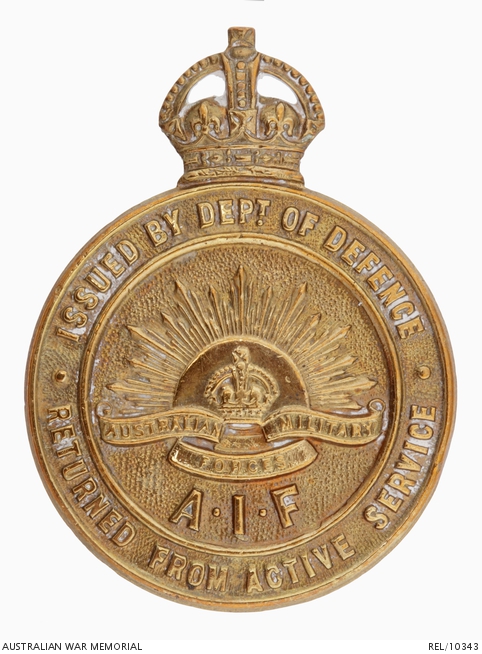 Discharged Returned Soldier Badge. In the centre of the circular brass badge is the rising sun and 'A.I.F' surrounded by the words 'ISSUED BY DEPT OF DEFENCE RETURNED FROM ACTIVE SERVICE'. The badge is surmounted by a King's crown. The reverse of the badge is impressed with the maker's details and the serial number 'C13748'.

Associated with the service of 5776 Private James William Hodges McCullough who was born in 1894, in Redfern, Sydney. McCullough served a five year apprenticeship with the firm Mauri Bros & Thompson before becoming a qualified engineer. During this time he also served in the militia as a trainee with the 6th Army Medical Corps.

Only days after the First World War began, McCullough was one of the first to enlist in the Australian Medical Corps element of the Australian Naval and Military Expeditionary Force (ANMEF). He was posted as a cook with the service number 7 and the rank of corporal.

McCullough embarked with the ANMEF from Cockatoo Island, Sydney on 19 August 1914 aboard HMAT Berrima. After a brief stop at Palm Island for further training, the force then proceeded to New Britain where after several brief skirmishes, the German troops surrendered. The British flag was raised over Rabaul on 13 September. After six months with the ANMEF, McCullough returned to Australia and was discharged on 4 March 1915.

He enlisted for service in the AIF on 2 November and was posted to the 14th reinforcements for 1 Division Signal Company with the service number 5776 and the rank of private. He embarked for service on 20 January 1916, disembarking at Alexandria, Egypt on 27 February. McCullough became a despatch rider and spent several months in Egypt before travelling to France at the end of May.

He was attached to 2 Australian General Hospital, Marseilles in early June where he again worked as a despatch rider. He was admitted sick to hospital on 20 August before being released back to duty two days later. The illness persisted and McCullough was sent to the 18th General Hospital at Camiers for further treatment on 1 September, returning to his unit two weeks later.

On 27 September, McCullough was posted to the Australian General Base Depot at Etaples where he underwent infantry training. He was then posted to the 19th Battalion. He joined the battalion on 12 November in the trenches near Flers and two days later, during the attack on Flers, was wounded in his right buttock.

McCullough was evacuated to England and spent several months recovering from his wound. In May 1917, he was posted to the Signals Engineers depot. Aside from going to hospital with influenza in July 1917, he spent the rest of the war in training and depot units.

He married Lucy May Revell of Shefford on 1 August 1918 and in May 1919 he was granted 8 months paid leave to stay in England. On 18 December, McCullough embarked for Australia in the passenger ship Konigin Luise. It is unclear whether his wife Lucy travelled with him. He disembarked in Sydney on 7 February 1920 and was discharged from the AIF, medically unfit on 10 April 1920.