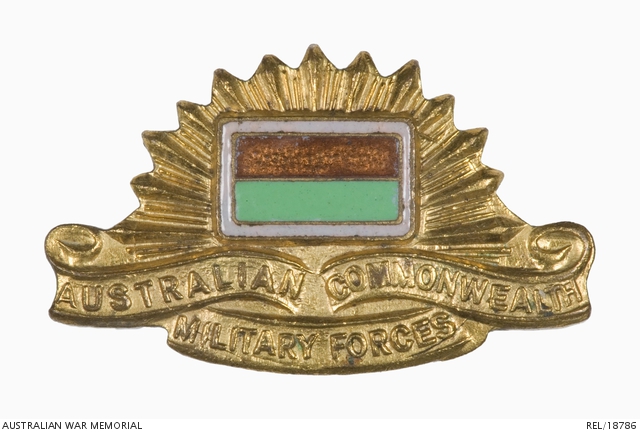 Small brass sweetheart brooch with Australian Commonwealth Military Forces 'rising sun' background. Over this is superimposed a horizontal rectangular enamel colour patch surrounded by a grey border. The rectangle is divided in half horizontally, the upper half being brown and the lower section green. This is the colour patch of 2/3 Battalion. There is a brass pin-fitting set into back of the brooch.

This badge is an example of commercially produced 'sweetheart' jewellery from the Second World War. Often worn by female relatives and/or a girlfriend or wife, the brooches were a symbol of pride, support and affection for a loved one serving in the armed forces. They could be purchased by the women themselves or given as a gift by the serviceman concerned. This badge is associated with Corporal Frederick James Johnson of 2/3 Battalion. Frederick James Johnson was born in Tempe, Sydney in 1914 and was living at Homebush when he enlisted in the AIF on 4 March 1941. He served with 2/3 Battalion, but was with HQ 16 Australian Infantry Training Battalion when he was discharged in September 1945.