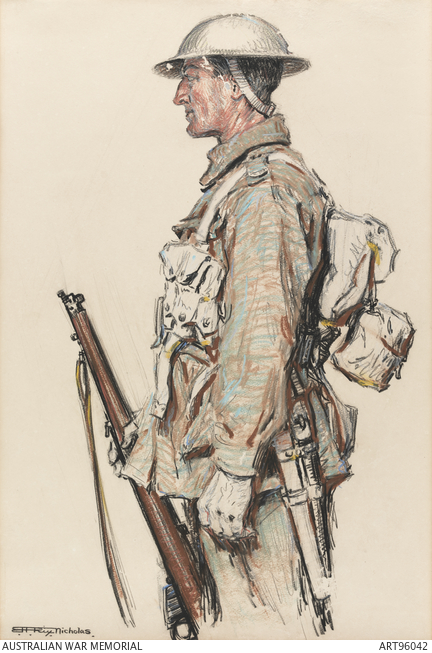 The artist Hilda Rix Nicholas married pastoralist Edgar Wright in 1928 and moved to live at his property 'Knockalong' at Tombong close to Delegate, NSW. She lived and worked there until her death in 1961. It is believed that this drawing was presented to the Bombala RSL in the late 1920s. The artist has a strong connection to the Monaro District and also made portraits of local soldiers and airmen during the Second World War.

Hilda Rix Nicholas (1884 - 1961) experienced the tragedy of war first hand; her husband, Major George Matson Nicholas, DSO was killed in action at Fleurs, France five weeks after they were married in 1916. Her mother and sister also died during the war and the grief she experienced is expressed in her work.

Rix Nicholas returned to Australia in 1918 and took a studio in Mosman, Sydney in 1919. She made drawings of soldiers who had returned from the war and were yet to find employment. The man who modeled for 'Stand at Ease' was one of these men. As a war widow, Rix Nicholas painted her soldiers with what she felt was a quiet dignity 'all the soldiers who have seen [my paintings] say they would have thought only a digger could have painted it, because I have the absolute spirit of the men "on the field" '. While popular with returned soldiers her work was not well received by the Australian arts establishment as she was working in a style and nationalistic sensibility not generally explored by women at that time.