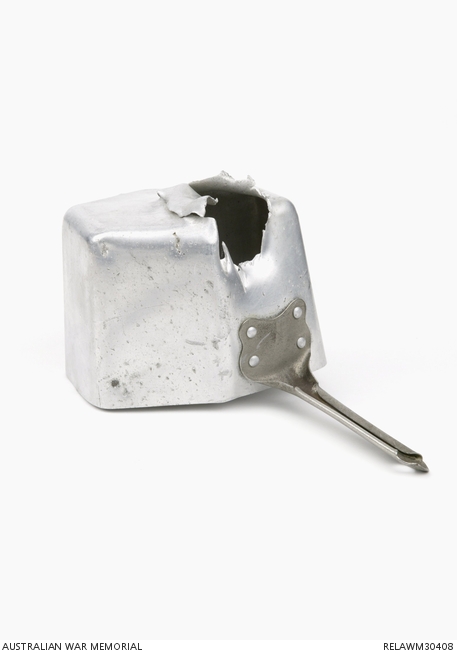 Bent and distorted hexagonal aluminium saucepan. The aluminium handle has rolled edges, and is attached to the body with four rivets. The tip of the handle has a hole for hanging. The words '99% PURE STRONG LITE ALUMINIUM' are stamped into the metal on the outside. The saucepan has a large hole in the base below the handle and a smaller hole at the front.

Damaged aluminium saucepan taken from the kitchen of a house in Rose Bay demolished by a shell from the large Japanese submarine I-24. The I-24, which had launched the midget submarine crewed by Sub Lieutenant Katsuhisa Ban and Petty Officer Mamoru Ashibe in the attack on Sydney Harbour a week earlier, fired ten shells into the Sydney suburbs of Bellevue Hill, Bondi, Woollahra, and Rose Bay on the night of 7-8 June 1942. Only three shell exploded, one of which fell outside the Yallambee Flats on Plumer Road, Rose Bay, where it caused considerable damage and slightly injured a local resident. As a result of the shelling, many residents of the Eastern Suburbs of Sydney took up temporary residence in safer locations such as the Blue Mountains of NSW.