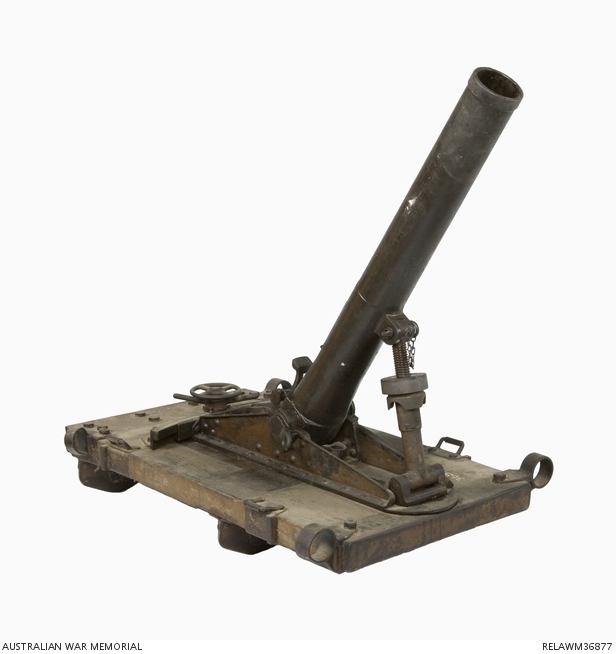 Japanese mortar, Model 11 (1922) calibre 70mm. This mortar has a rifled tube, and fires a projectile of the same design as that used in the common Model 89 grenade discharger. It is fired by the impact of a percussion hammer against the firing pin, this differs from most mortars where the primer comes in direct contact with a fixed firing pin when it hits the bottom of the barrel in loading. The barrel, elevating and traversing mechanisms are made of steel, the base plate is wood, reinforced by metal with spades on the bottom surface. There is a quadrant seat on the lower portion of the barrel. The barrel is rifled and has eight grooves with a uniform right hand twist. The left edge of the lands strike the barrel at an approximate angle of 100 degrees. The traversing mechanism is composed of a pinion moving a traversing gear rack which in turn moves the mortar and its mounting around a pintle in the front centre of the base plate. The mortar is fired by means of a lanyard attached to a striker arm. The propellant is contained in the base of the projectile. The elevating gear attaches the barrel to the mount and the base of the barrel is attached to the mount by trunnions. Range about 1700 yards. This example is marked with the serial number 236.

This mortar was collected by No 5 Military History Team, Item number 291 - one "Mortar 70mm Model 11" among Japanese war relics collected by No 38 Division Area (Japan) and held at Kokopo. The mortar arrived along with other relics on SS Salamaua in Sydney.