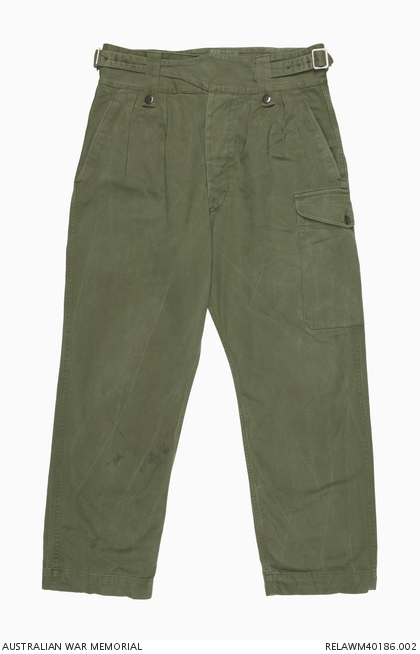 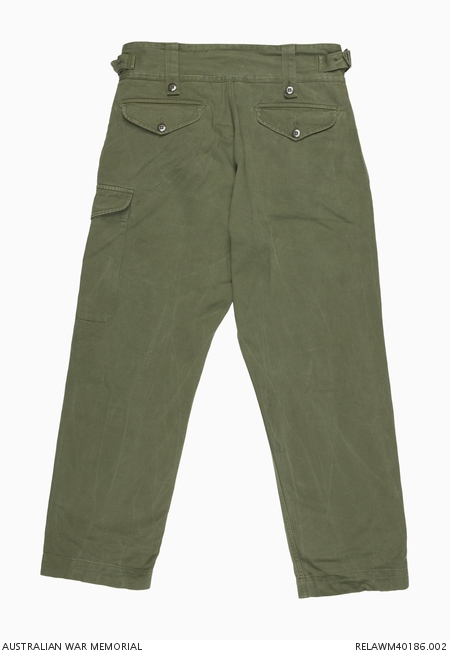 Jungle green trousers with concealed five buttons fly closure. The waist is adjusted by a pair of cross-over straps connecting to chrome buckles at the hips. The waist band has four wide belt loops attached with buttons. There is a slash pocket in each side seam below the waist and a large patch pocket on the right hand side of the thigh with a pointed flap and single button closure. There are two welt pockets with a pointed flaps and single button closure at the rear. A black printed green label inside the back waistband reads 'A. H. DAVIS & CO. South Australia 1968 D [broad arrow symbol] D / ARMY No. / NAME'. The inside waist is also marked in texta, 'ANX'. All buttons are of dark brown plastic.

Jungle green trousers worn by Raymond Woolan during his service in Vietnam.

Raymond 'Mick' Woolan was born at Blacktown, New South Wales in 1935. He was working as a teller at the Cessnock branch of the Bank of New South Wales when he was called up in the seventh national service intake in April 1967. After completing a selection process at Singleton, New South Wales Woolan was sent to officer training at Scheyville, New South Wales, which he completed in October 1967. He was then allotted to the infantry as a 2nd Lieutenant (2LT). He deployed to Vietnam with 1 Reinforcement Unit in September 1968, and was posted to A Company, 1 Battalion, Royal Australian Regiment in December of the same year. This posting was to replace 2LT Terry Langlands, who had been killed in action on 24 November 1968. Langlands had been a friend of Woolan's during their infantry training at Singleton.

On the afternoon of 27 May 1969, the Defence and Employment Platoon were on operations with tanks of B Squadron, 1 Armoured Regiment in the Courtenay rubber plantation near the Long Khanh provincial border. Woolan's platoon established an ambush in a suspected Viet Cong staging area, and, at about 6 pm engaged a group of approximately twenty five Viet Cong. A second group of Viet Cong then appeared, and were also engaged. These were followed by a third group, who attempted to encircle the Australian position. Woolan and his men were now seriously outnumbered, but Woolan directed the fire of his soldiers and that of supporting mortars in order to regain the initiative. He then called for armoured assistance. The Viet Cong continued to press their attack but were repulsed by the Australians, and eventually withdrew upon the arrival of B Squadron's tanks. For his courage and leadership during this action 2LT Woolan was awarded the Military Cross.

Woolan's uniform, equipment and rifle were collected in Vietnam specifically for the Australian War Memorial by another officer, Captain A J 'Jack' Balsillie, who was himself posted to 1ATF Headquarters. Woolan donated his kit immediately prior to his return to Australia in September 1969. Upon his discharge from the army he returned to work at the Bank of New South Wales.