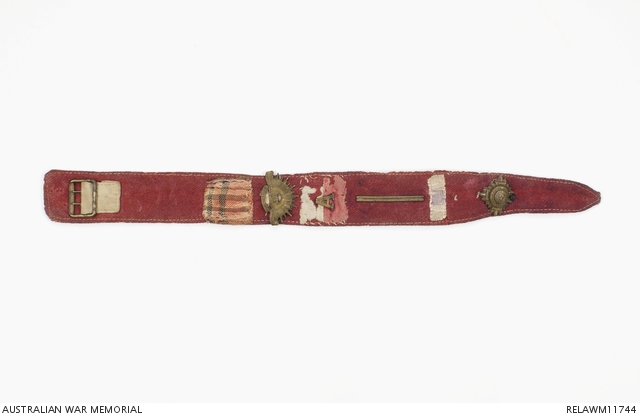 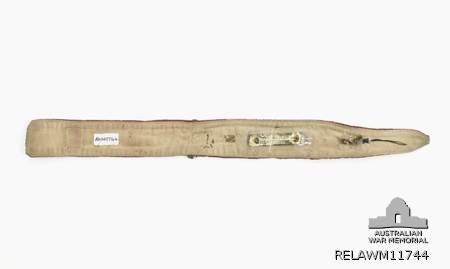 Crimson wool twill dog collar lined with cream cotton twill. A brass buckle stamped 'PARIS' is attached to one end with the same cream fabric. Attached to the collar is a square of tartan fabric, a copper 'Rising Sun' collar badge, a fragment of a white and red colour patch for 8 Battalion, AIF, with a brass Anzac 'A', a brass wound stripe, a piece of Military Cross ribbon and a brass officer's rank pip.

This improvised dog collar was worn by 'Spot', a mascot of 8th Battalion, AIF. The red band of the collar was originally an armband worn by one of the battalion's despatch runners. Images of Spot can be seen in photographs H15733, H00517 and H00518.

Major Robert 'Bob' Wallis, the battalion's second in command, later recorded: 'Spot attached himself to the battalion just after its arrival in France. He had no collar then. It did not come to him until one of our despatch-runners, who had been great pals with Spot, was killed in action. Our boys thought the chap who was killed would not wish any better future for his arm-band, his rising sun, his Anzac 'A' and his colours [unit colour patch], than they should adorn Spot's neck. That was the beginning.

It was at Polygon [Wood] that Spot stopped a packet. A shell-splinter rip put Spot out of action. He was patched up by the surgeon, and awarded a wound-stripe for his share in the fighting.
Then came Passchendaele. Spot was the inspiration to us all. When everyone was depressed and mopey, he was merry and bright. We were so successful there, and there were a few military decorations flying around afterwards. So the boys decided Spot must have the Military Cross. They each contributed half an inch of ribbon, and the deed was done.

After Passchendaele we went down to Rosteres. Our officer casualties there were very heavy, and after it was finished somebody said, "There's nothing for it. We're short of officers. We'll have to give Spot a star". Thus, Spot was raised to the dignity of a Second Lieutenancy.
Men came and men went, but Spot stayed on with us. He was still on deck when the armistice was signed. Our boys determined to get him home to Australia. Of course, there were very strict rules against carrying dogs from France to England. Spot, however was smuggled on board the ship and hidden in a specially-made box among the battalion gear. A darned steward found him sniffing away in his prison and told the Captain. The Captain sent for the commanding officer and said Spot would have to be thrown over the side.

We couldn't do that. It would have been like tossing one of our own men into the sea. So our surgeon put him out of the way - poor old Spot, a real dog-of-war if you want one... and the steward? He had an accident on the wharf. A broken jaw, I think. It put him in hospital, anyway.'