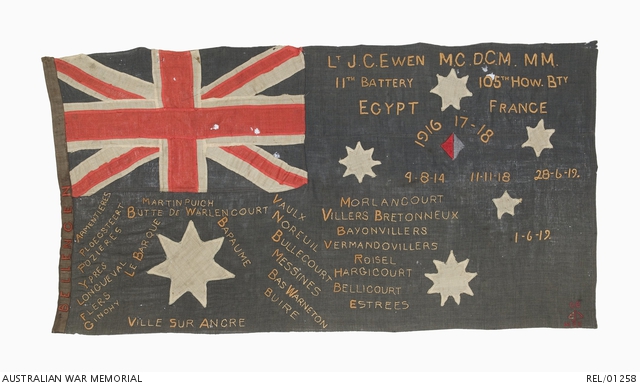 Wool bunting Australian blue ensign embroidered in red and blue cotton with a representation of the colour patch of 2 Division Field Artillery. The flag is also embroidered in gold cotton 'LT J.C. EWEN M.C. D.C.M MM. 11TH BATTERY 105TH HOW. BTY EGYPT FRANCE 1916-17-18. Underneath this is the embroidered representation of the colour patch with the following dates beneath it: '4.8.14/ 11.11.18/ 28.6.19/1.6.19'. The following names are embroidered on the flag, representing the places in France and Belgium in which Ewen saw service: ' MARTIN PUICH/ BUTTE DE WARLENCOURT/ BAPAUME/ LE BARQUE/ VILLE SUR ANCRE/ ARMENTIERES/ PLOEGSTEERT/ POZIERES/ YPRES/ LONGUEVAL/ FLERS/ GINCHY/ VAULX/ NOREUIL/ BULLECOURT/ MESSINES/ BAS WARNETON/ BUIRE/ MORLANCOURT/ VILLERS BRETONNEUX/ BAYONVILLERS/ VERMANDOVILLERS/ ROISEL/ LARGICOURT/ BELLICOURT/ ESTREES'. 'BELLINGEN', where Ewen farmed in Australia, is embroidered in red on the flag's hoist. The flag is framed and mounted on a blue backing board which has a painted representation of a flag staff on the left side.

John Carr Ewen was born in England in 1892 and emigrated to Australia in 1912 where he took up farming at Bellingen in New South Wales. He enlisted for service with the AIF on 21 October 1915 and sailed for Egypt with 2 Divisional Ammunition Column the following January.

In Egypt he transferred to 22 Howitzer Battery as a gunner before sailing to France in March 1916, where he transferred to105 Howitzer Battery, 5 Field Artillery Brigade. He was awarded the Military Medal (MM) for gallantry and self-sacrifice at Pozieres on 3 August 1916 and was promoted to bombardier. Ewen, by now a sergeant, was awarded the Distinguished Conduct Medal (DCM) at Bullecourt on 30 April 1917 for conspicuous gallantry and devotion to duty.

In June he was sent for officer training and returned to France in December 1917, joining 11 Battery of 4 Field Artillery Brigade. At Herleville in August 1918 he was awarded the Military Cross (MC) after he took the place of a forward observation officer who had been killed. He was one of only six members of the AIF to receive the rare combination of MC, DCM and MM. Ewen was wounded on 3 October 1918 and saw no further action. He again enlisted for service in the Second World War and at his insistence was finally sent to New Guinea on active service, despite his age, where he served as a major with 17 Field Regiment. He was discharged in March 1944.

This flag was presented to Ewen by the residents of Bellingen, when he enlisted in the First World War and he carried it as a reminder of Australia throughout the war. As Australian flags were not issued to units serving overseas Ewen's flag was often called into service for various ceremonies in France. His mother subsequently embroidered the names and dates on the flag.