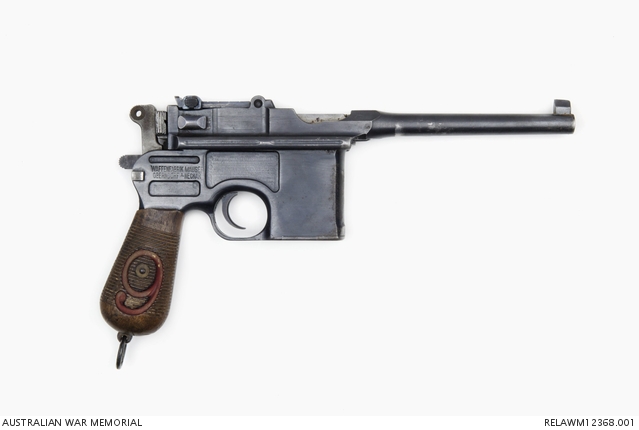 Mauser C96 semi-automatic pistol. Frame marked WAFFENFABRIK MAUSER OBERNDORF A.NECKAR and the serial number is on the breech. A slot is cut into the back strap for the stock holster. The pistol grip is incised with a large red numeral '9', in filled with red paint. This denotes that the weapon is one of 150,000 C96 pistols chambered in 9mm Parabellum. This was undertaken by the Govermnment to offset the slow production of the standard-issue Luger P08 pistol. The number "9" warns the pistols' users not to incorrectly load them with 7.63 mm ammunition. The pistol has a steel loop at the bottom of the grip to which a lanyard can be attached.

This pistol was taken from a German officer who surrendered to Captain George Hubert Wilkins, an official war photographer, on the morning of 18 September 1918 during the Battle of the Hindenburg Outpost Line. Although Wilkins had already been awarded a Military Cross at Ypres the previous year, and would gain a bar to his Military Cross just 11 days after this action, no official account appears to have survived regarding the details of the capture of this pistol on 18 September 1918.

Wilkins passed the Mauser onto Charles Bean, the official historian sometime between 1918 and 1935; the latter date marking when its existence first appears in an Australian War Memorial register. The Mauser pistol was captured with its leather holster, enclosing the wooden stock, which appears at RELAWM12368.002