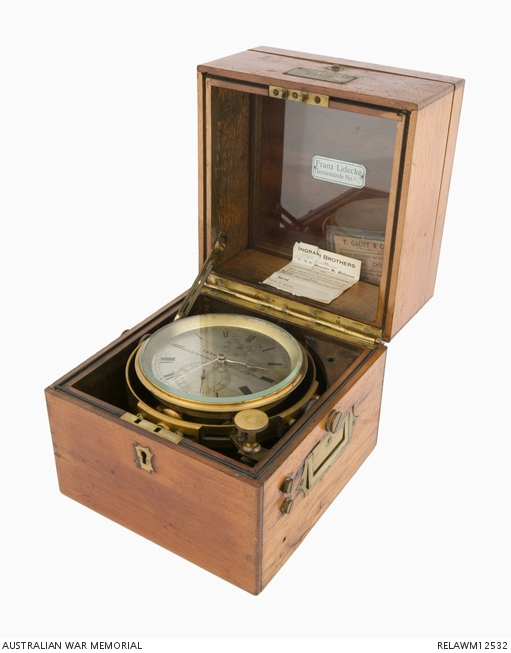 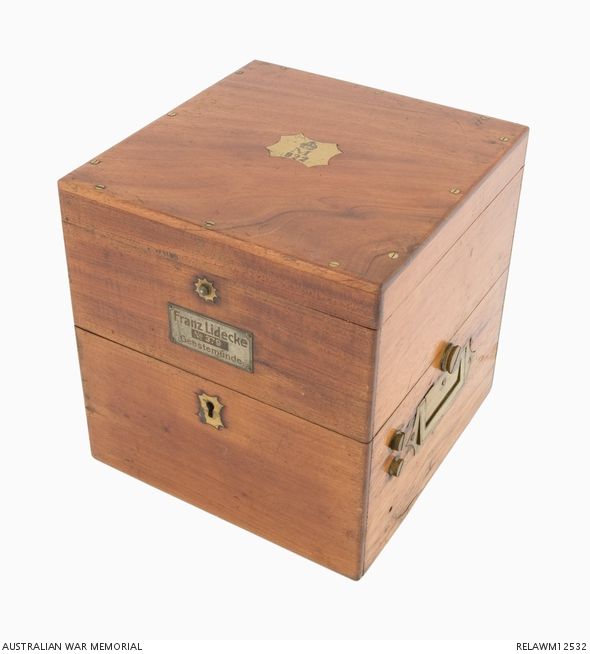 Chronometer consisting of the instrument housed in a varnished timber case, fixed with brass fittings and hardware. This chronometer is believed to have been made before the outbreak of the war in August 1914, as Lidecke is known to have used imported British components for their chronometers. Although the details of the movement have not been established it is likely that this instrument has Guillaume balance and an Earnshaw detent. The chronometer is housed in a standard wooden case of three sections consisting of a two-piece main case with a glass top on top of which is mounted a further timber lid. This design allows the chronometer to be read through the glass top without exposing it to temperature and humidity changes. The main case would only be opened to service the chronometer. The lid has an inset brass plaque marked with the imperial Crown of Wilhelm II and an inscription ‘M 922’. On the top section of the main case is a press catch to release the lid. Below this is a nickel-plated brass plaque marked ‘Franz Lidecke No 379 Geestemunde’ The lower section of the case is fitted with a pair of recessed brass handles on the side and a pair of pivot points for the gimbal mount for the chronometer. On the front is a keyhole to operate a simple lever-type lock; the key is missing. On the inside of the lid there is a small printed aluminium plate marked ‘Franz Lidecke Geestemunde No. 379’. Inside the lower case is the gimbal, the chronometer and a transport locking fitting, which is located in the front right corner. At the rear right corner is a small timber triangular fitting to house the winding key, which is missing. The chronometer is enclosed in a lacquered brass casing with access for winding on the base. The face of the chronometer is nickel plated brass with engraved characters. The movement requires winding after 56 hours operation, it is fitted with hour and minute hands with a separate seconds sweep hand and dial. On the inside of the main case is a label stuck to the timber with adhesive and is inscribed ‘INGRAM BROTHERS 57, 59, 61 Swanston St, Melbourne Chronometer & Watch Makers to the Melb. Observatory. Australian Navy. &G 1299 379 Lieut Com Stevens C/O Navy Office 2/7/29’. On the bottom of the case there is some corrosion damage and evidence of timber shrinkage indicating that the base has been wet. There is a rectangular, cardboard ticket, which has been laminated by Memorial staff housed between the top two sections of the timber case. It is not physically attached to the case in any way. The obverse of the ticket reads: 'T. GAUNT & CO. PTY. LTD. 337=339 Bourke St., Melbourne. This ticket must be produced when the Watch is called for, and a description of the Watch given if required. NOT RESPONSIBLE AFTER 6 MONTHS.’ On the reverse: 'T. GAUNT & CO. PTY. LTD. WATCH RECEIVED for REPAIRS Reference No. C 28951 337-339 Bourke St., Melbourne Chron Lidecke 379. (20.6.29)'

The chronometer was originally the name for a metronome but it was applied to precision timekeeping in 1714. It is now the general name for a non-pendulum clock or watch. Chronometers were used on maritime vessels to assist in navigation. Before the advent of radio time signals a chronometer was the only device that provided the time accurately enough for a ship at sea to determine its longitude. In use, a chronometer would be set to the time of a place of known longitude, such as Paris or London. Standard time would then be compared with local time, where one hour of difference is equivalent to 15 degrees longitude.

This chronometer was salvaged from S-132, a German torpedo boat destroyer after the scuttling of the German High Seas Fleet at Scapa Flow in 1919. The S prefix is specifically for the German manufacturer Schichau who was one of six manufacturers that made German torpedo boat destroyers during the First World War. S-132 was laid down in 1916 at Elbing, Germany (now Elblag, Poland) and was launched on 19 May 1917. The vessel was commissioned into the German High Seas Fleet on 2 October and was assigned to VI Torpedo Boat Flotilla. S-132 served in this flotilla until the end of the war when it was interned at Scapa Flow. Article XXIII of the Armistice that came into effect on 11 November 1918 stated two of Germany’s three battle squadrons, together with all five battlecruisers, eight light cruisers and forty-nine destroyers should be interned and all submarines given up. At dawn on 21 November 1918, 370 ships of the Royal Navy escorted the German Navy into Scapa Flow, to await their fate to be decided by the Treaty of Versailles. When the German officers at Scapa discovered in May 1919 that – as laid before the German delegation at Versailles – the entire fleet interned at Scapa would be handed over to the victorious Allies, with Britain getting the largest share, they were determined to save the honour of their unbeaten fleet. Secret orders were issued on 17 June for the High Seas Fleet to be scuttled. Taking advantage of the Royal Navy guardships’ absence on training exercises, Rear-Admiral Ludwig von Reuter, commander of the fleet, executed his orders on 21 June. However in the subsequent confusion S-132 was beached by its crew and eventually salvaged. The vessel was towed to the United States where it was sunk as a target on 15 July 1921 by US Ships Delaware and Herbert off Cape Henry, Virginia.

This chronometer was donated to the Australian War Memorial in 1936 by Commander Charles Whettnall Stevens RAN. Stevens had been given the chronometer by Lieutenant Russell of the Royal Navy after it had been salvaged from S-132 at Scapa Flow. Stevens was born in St Ives, England on 5 November 1879 and joined the Royal Australian Navy on 12 September 1911 as a Lieutenant. At the outbreak of the First World War Stevens was serving on HMAS Melbourne, which took part in the seizure of German possessions in the Pacific and landed a naval party on Nauru Island on 9 September 1914 to carry out the destruction of the wireless station. Stevens transferred from HMAS Melbourne to HMAS Encounter on 10 May 1916 where he remained for the duration of the war. Stevens continued to serve on a variety of vessels during the post-war period including HMAS Brisbane and again HMAS Melbourne. He joined HMAS Cerberus based at the Flinders Naval Depot on 3 June 1925 where he took up a position in the Chart and Chronometer Depot. He stayed there for five years. During the Second World War Stevens remained in auxiliary naval service having been transferred to the Retired List on 5 November 1940. He served at the naval depot in Hobart, HMAS Derwent until April 1942 when he transferred to HMAS Rushcutter, the naval depot at Edgecliff. He remained at Edgecliff until 1 September 1945 when his naval appointment was permanently terminated. He was 65. Stevens died in Sydney in the mid 1960s aged in his eighties.