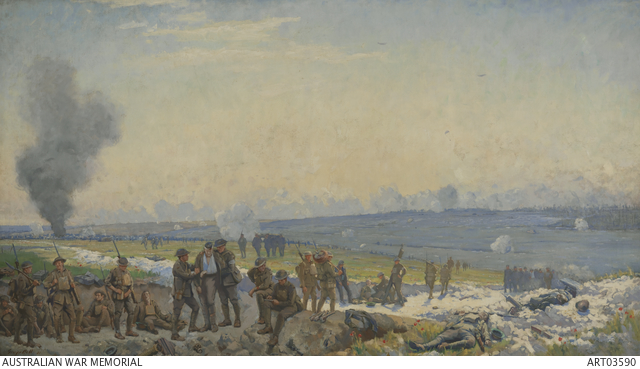 Depicts the Battle of Hamel, July 1918. Australian Corps were under the command of General John Monash (the Battle of Hamel was his first operational success; the Australians had artillery support of great precision and co-operated enthusiastically with tanks, some of which acted as supply carriers, saving the effort of hundreds of troops; ammunition was dropped by parachute over the forward areas); and this work incorporates a view of approaches to Hamel and Wood in the right distance. German prisoners are being brought back, wounded being attended to, and the officer in left foreground is writing a message with his runner (red wrist band) waiting. In the foreground are a German flare pistol, several German stick grenades, an ammunition can for the belt of a Maxim machine gun and a wrecked 1908 Maxim machine gun, while a biplane fly's over dropping supplies by parachute. In the background the smokescreen that covered the advance lingers.