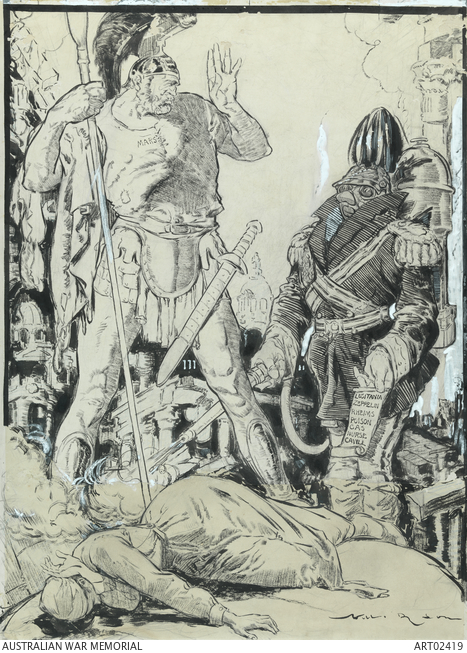 Depicts the cartoon published in the London 'Daily News', 26 October 1915, commenting on the execution of Edith Cavell, a British nurse accused by the Germans of being a spy. The slumped and bloodied body of Edith Cavell lies in the foreground of the cartoon, with the figures of the god of war, Mars, towering over her. Beside him is German or Prussian soldier in uniform, holding a list with the words 'Lusitania', 'Zeppelin', 'Rheims', 'Poison/ Gas/Nurse / Cavell' inscribed on it. When published, this cartoon was accompanied by the following text; 'The God of War (to Germany) : "False friend! The deeds you do in my name rob me of my future. Where now can I hope to find new patrons when this is all over?" "It must not astonish the British or the French if guilty persons of either sex are treated according to the Laws of War". From 1915 , a number of Dyson's caricatures were published , characterised by his response to Germany's military monarchy. Using a figure loosely based on the Kaiser, Dyson identified the 'common enemy' and attacked it with vigour. When some of his anti-German cartoons were published in 1915, they were accompanied by the following foreword; 'Mr. Dyson...responds to all the fearful pressure of this war in cartoons. He perceives a militaristic monarchy and national pride a threat to the world, to civilisation, and all that he holds dear, and straightaway he sets about to slay it with his pencil...he turns his passionate gift against Berlin." Will Dyson was the first Australian official war artist to visit the front during the First World War, travelling to France in December 1916, remaining there until May 1917, making records of the Australian involvement in the war. He was formally appointed as an official war artist, attached to the AIF, in May 1917, working in France and London throughout the war. His commission was terminated in March 1920.