The village, I think, is Ribemont 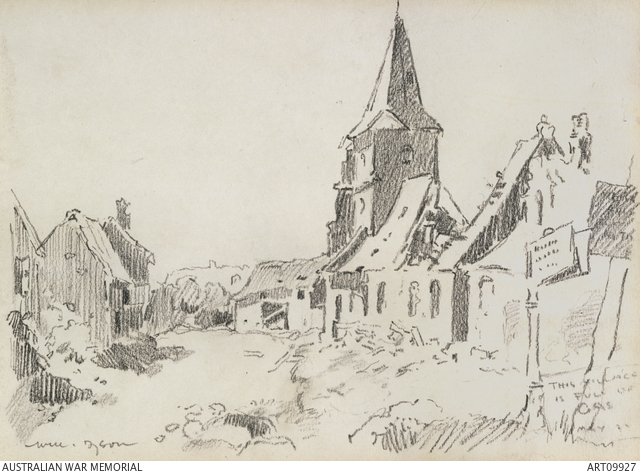 Depicts a scene of the village of Ribemont with a view of the village showing damage to buildings, and a notice in the foreground warning of the presence of gas in the village. This drawing was likely created around 9 May 1918 when the 21st Battalion marched from Querrieu, where they had been resting, back into the support line. Charles Bean described how, although the village was not as damaged as those around Pozieres had been in 1916, it was full of poisonous gas from German shelling, which made it unsafe. However, the soldiers still took shelter in cellars and other shelter that the abandoned village offered (Charles Bean, Official History of Australia in the War of 1914-1918, vol. vi, p. 25.) Will Dyson was the first Australian official war artist to visit the front during the First World War, travelling to France in December 1916, remaining there until May 1917, making records of the Australian involvement in the war. He was formally appointed as an official war artist, attached to the AIF, in May 1917, working in France and London throughout the war. His commission was terminated in March 1920.