Waiting for the stew 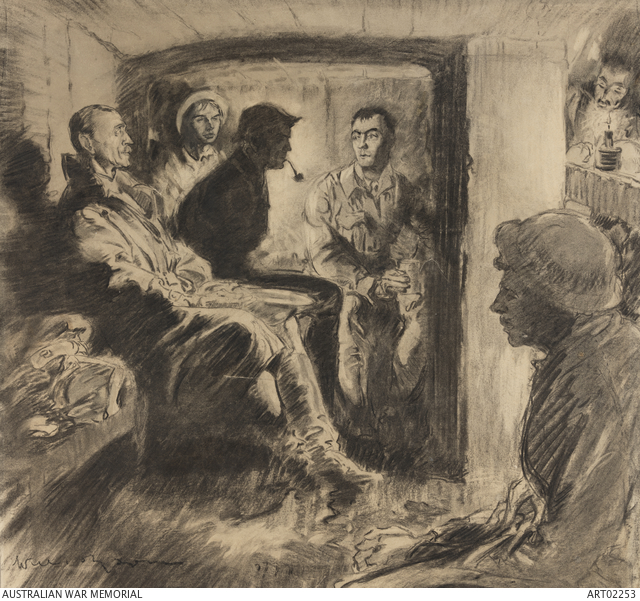 Depicts a number of Soldiers in uniform seated and waiting for their food at the Company Headquarters. One soldier is smoking a pipe and another is holding a lit candle. When reproduced in 'Australia at War' (London, 1918) this image was accompanied by the following text; 'A dixie of stew for each company was to arrive with the machine guns at the pill box at 12.30 and then into the line. But there was a block on the corduroy....so the dixie's were man-handled from there across the duckboards where duckboards were and across the mud where they were not the pill box. They arrived there at three o'clock...the dreadful possibility of going in without that stew began to haunt the strongest and the brave...It was the process of sitting still in the dripping cover of that triumph of German architecture, Sexton House, and watching the appetite grow...'. Will Dyson was the first Australian official war artist to visit the front during the First World War, travelling to France in December 1916, remaining there until May 1917, making records of the Australian involvement in the war. He was formally appointed as an official war artist, attached to the AIF, in May 1917, working in France and London throughout the war. His commission was terminated in March 1920.