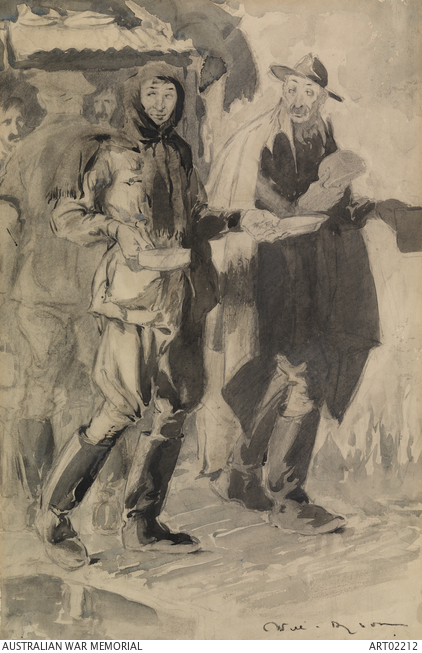 Depicts two unidentified soldiers of the 5th Division, 14th Brigade getting a hot meal. One is wearing a scarf around his head, the other a cape, and both are wearing gum boots. Will Dyson was the first Australian official war artist to visit the front during the First World War, travelling to France in December 1916, remaining there until May 1917, making records of the Australian involvement in the war. He was formally appointed as an official war artist, attached to the AIF, in May 1917, working in France and London throughout the war. His commission was terminated in March 1920. This work was exhibited at the Leicester Galleries, London in 1918. A review of the exhibition in 'The Times', 5 December 1918 noted; 'Mr. Dyson does not draw exciting moments in the soldier's life at the front. He does a harder thing. He draws fatigue, boredom, discomfort, dirt...and every drawing expresses his admiration of their endurance, his reverence before the mystery of the inimitable mind'.